The Role of the Media in Mental Health Stigma 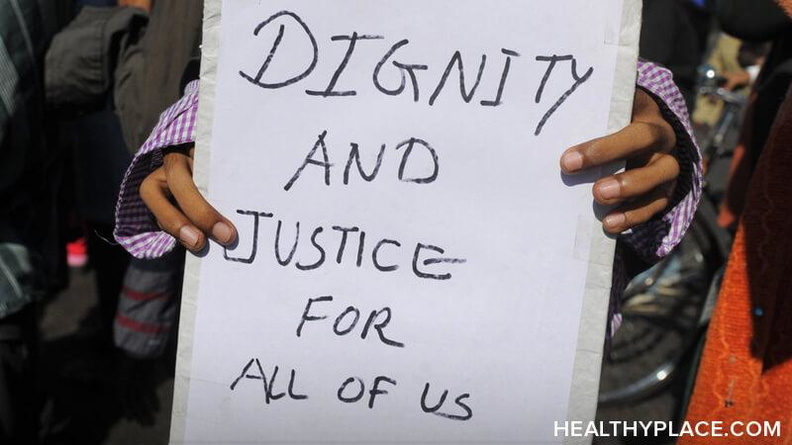 I think we often forget just how much of our understanding of mental illness comes directly from the media. Think about your thoughts on Electroconvulsive therapy (ECT) for a minute. How much are your opinions distorted by the horrendous image of R.P. McMurphy getting shocked senseless in One Flew Over the Cuckoo's Nest?

Do you think people with a mental illness are violent because they are often portrayed as violent in movies? Or do you think that because you actually have evidence to support it?

Don't Believe Everything the Media Says About Mental Health 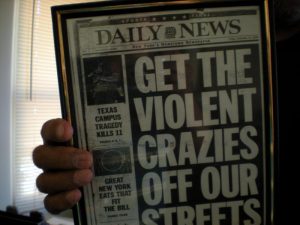 It's troubling to think just how influenced we are by what we see on the big screen, our laptops and in newspapers and how little we are influenced by actual people who struggle with mental health challenges. Personally, I know many people who have struggled with depression, bipolar disorder or anxiety and they all appear perfectly normal. They have never hurt anyone and likely never would hurt anyone.

But if you asked someone who got their mental health information from popular culture, they may believe that everyone with a mental illness is violent.

Reading the newspaper can bring about a whole new set of complications. As a former journalist, I know that sometimes the deadline is approaching and you still don't have all the facts that you need for a good story. For example, a journalist may have the information that a suspect has been treated for, let's say, schizophrenia, in the past. But they may not have information about whether they were suffering symptoms at the time of the offense. But simply saying that they have been treated for a mental illness implies that the mental illness has some effect on the offending behavior.

For example, a journalist may have the information that a suspect has been treated for, let's say, schizophrenia, in the past. But they may not have information about whether they were suffering symptoms at the time of the offense. But simply saying that they have been treated for a mental illness implies that the mental illness has some effect on the offending behavior.

The Media Should Accurately Report About Mental Health

And that is often not the case. In reality, it is substance abuse, not mental health challenges, that often lead to offending behavior.

According to the Canadian Mental Health Association

. . . as a group, people with mental health issues are not more violent than any other group in our society. The majority of crimes are not committed by people with psychiatric illness, and multiple studies have proven that there is very little relationship between most of these diseases and violence.

There are of course some extreme examples of someone suffering from psychosis who becomes violent. These grab headlines the world over and serve to taint the societal view of those with a mental illness. Just as in any group, there are bound to be some who deviate from the norm. But when the media focuses on this tiny percentile instead of the huge percentile that never violently offend, they are doing society a great harm.

Let's face it. A story about someone shooting up an office building is going to sell more copies than a feature article on someone living with schizophrenia who has just opened their own business.

But, the Sensational Sells

Even so, just because it would sell a lot of copies doesn't mean that editors should be putting it on the front page. We need more stories in the media of people successfully coping with mental health challenges and less emphasis on the small percentage who are violent.

I work right next door to a homeless shelter where a good portion of the clients suffers from mental health challenges. I walk by there at least four times a day and in two and a half years, I have never been assaulted, or even yelled at. And I have never been fearful of an unprovoked attack.

I would be much more concerned walking by a group of intoxicated people than a group of mentally ill people any day.

And you should be too.

APA Reference
Curry, C. (2013, August 26). The Role of the Media in Mental Health Stigma, HealthyPlace. Retrieved on 2022, August 8 from https://www.healthyplace.com/blogs/survivingmentalhealthstigma/2013/08/the-role-of-the-media-in-mental-health-stigma

The Pain of Self-Stigma Because of Mental Illness
Mental Health Stigma: An Interview with Patrick Kennedy (Part One)
Robinn G
November, 4 2015 at 6:50 am

I think that, 1) the Media is vastly biased against us, purposefully, and is unwilling to do the research to educate themselves about us. It is far easier kick back and go along with the current party line than to do some honest research, and, 2) for some reason they ignore the vast number of non-mentally ill repeat offenders who don't have an Axis I psychiatric diagnosis. I would be willing to bet that there are many Axis II undiagnosed personality disorders out there though! Like people with undiagnosed antisocial personality disorders!

Actually the source of stigma for 'mental illness' lies in the fundamentals claims of psychiatry, the DSM, and the disabling treatments of psychiatry: GOOD STRATEGY TO REDUCE THE STIGMA OF MENTAL ILLNESS (and other harmful effects):
-Question the validity of the labels of psychiatry (a/k/a “diagnosis”) promoted through the DSM(Diagnostic and Statistical Manual of Mental Illness), and assert your right to REFUSE psychiatric treatment as well as receive it.
-Don't accept any physical/bio-medical oriented psychiatric treatment that hasn't been preceded by a discovered, or at least discoverable underlying physical trigger or cause in YOUR body, not just a theoretical body, that the treatment targets. Don‘t accept the validity of a theoretical underlying physical condition based only on questionable, often marketing-oriented "junk" science, often intended to promote the use of psychotropic drugs or shock (ECT).
-IT IS USUALLY THE PSYCHIATRIC LABELS (a/k/a “diagnosis”) THAT TEND TO STIGMATIZE PEOPLE, NOT THE SYMPTOMS ASSOCIATED WITH THEM, and tend to justify most psychiatric treatment and the pharmaceutical oriented mental health monopoly of drug (and shock) treatment. The symptoms of these so called "illnesses" or "disorders" are usually problems with emotion, perception, thought, memory, behavior, and life experiences that are very real, but are not typically "diagnosed" (labeled) on the basis of ANY underlying physical conditions.
-The (“diagnostic”) labeling process in typical psychiatric diagnosis is not a medical diagnosis involving an evaluation and discovery of associated underlying physical conditions. It allows a bio-medical monopoly on human problems, and continued, often unwarranted and unethical profits for the medical and pharmaceutical establishment- at the expense of your over all health and well-being. Don't allow yourself/others to be labeled in this manner.
-Psychiatry often demonizes these "mental ills" by suggesting that persons "diagnosed" are an actual or potential danger, or threat to themselves and/or others, with no more evidence than the labeling description and (inadequate) process itself. It is also often asserted that these "illnesses" are incurable, justifying continued treatment (typically a drug oriented form), and offering no alternatives to drug treatment (or shock). This IS the stigma that tends to result in the conclusion (of those "diagnosed", and others who know the person has been "diagnosed") that people so diagnosed don't get better and are "permanently" disabled.
-AND, unfortunately long term psychiatric patients subjected to drug/shock oriented treatment often do become very physically ill, disabled, and possibly violent or suicidal as the result of the treatment, not as the result of a labeled mental illness, as those promoting psychiatric treatment often suggest. Current drug black box warnings evidence this as well as the facts about the mass shooters' 'mental health' histories
-Insist on and seek alternatives to the bio-medical, drug oriented model for mental health treatment, and to the DSM oriented system of evaluation. ~Jim Keiser