Robin Williams' Suicide: Did He Have a Choice?

Actor and comedian Robin McLaurin Williams died by apparent suicide in his California home on August 11, 2014. His death has shocked and saddened millions all over the world. I'm personally stunned. I grew up with his performances, starting with Mork & Mindy on television when I was a kid. It's a tragic, tragic loss. We took a hard punch on this one, and we'll be feeling it for quite some time.

When a high profile person takes their own life, it triggers the debate about suicide itself. Is suicide selfish? Is it cowardly? How can anyone do that, anyway? And, most importantly, why didn't they ask for mental health help? How come they didn't make a different choice?

Was Robin Williams' Suicide a Choice? 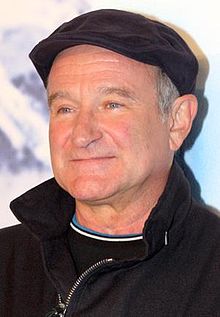 I can't answer any of these questions. I simply don't know. I don't believe anyone really knows.

What I do know is that I've been in a similar place of darkness. A place where the blackness, the emptiness, and the despair were so complete, so overwhelming, that not only did suicide look like an option, it looked like a great option. It made sense.

Is that what Robin Williams felt? We'll never know.

Let me emphasize, I do not advocate suicide. I believe everyone has a right to live, and that everyone should be able to get the help they need, free from the stigma of mental illness. If I didn't believe that, I would not be a blogger at HealthyPlace.

What if Robin Williams Had Not Died by Suicide?

Let's consider if Robin Williams had not died by suicide and had reached out instead. What would the consequences have been for him and his family? I believe they would have gone something like this:

I could go on, but I'm sure you get the idea. Suicide is a dirty word in our culture, made even dirtier by the ugly slander and distorted reality that go hand in hand with stardom. I can't imagine being suicidal and facing that kind of pressure. Can you?

Some will, no doubt, say that Robin Williams' suicide was selfish. Others will feel more compassionate. Still others, including myself, will wonder what his public admission could have done to break down stigma and give hope to those suffering the same feelings. In the end, most people will probably just feel bewildered by it all.

Could Robin Williams have made a different choice? Only he could answer that. For my part, I neither condone nor condemn; I just wish it were different. But I do believe, in my heart, that I understand. He was one of us, and he still is.

More on the Suicide Death of Robin Williams

APA Reference
Weber, G. (2014, August 13). Robin Williams' Suicide: Did He Have a Choice?, HealthyPlace. Retrieved on 2020, June 3 from https://www.healthyplace.com/blogs/treatinganxiety/2014/08/robin-williams-suicide-did-he-have-a-choice

What Do You Do When Anxiety Makes You Feel Unreal?
How to Practice New Social Skills When You Have Anxiety
sr handel
August, 25 2014 at 7:46 pm

To the poster above, i have a son who has high functioning autism....one of the reasons i like watching Mork is because in a lot of ways Robin was playing someone who could have had Asperger's in the role of Mork. My son is clueless about a lot of things....i have to explain everything to him and he is 20. He is able to drive a car and work a cash register now in a store. I am simply amazed by the similarities of an Aspie with Robin playing the role of someone from another planet.
You need to stick around for your daughter.

God how I miss him....he was the best. I cry watching Mork and Mindy. He was so perfect for that role. Another part of my chilhood has died. RIP Mork.

Tina,
It sounds like you both need support. There's a whole section on HealthyPlace about parenting, including info on special needs children:
http://www.healthyplace.com/parenting/
There is also a support forum about parenting here:
http://www.healthyplace.com/forum/parenting/
I would suggest connecting with the people there and asking their advice about how to best help your daughter and yourself.

my daughter is 38, with a mental age of 12. she also has a mental health problem, seizures and a pacemaker. where do I get help for her. she is a child, treated like an adult. she doesn't understand. she looses control and screams and swears. she cant help it. but mind will not help because she is special needs, and special needs will not help because she has a mental health problem, the tablets she takes make it worse. where is the help we need. I often think death would be a realise

The definitive answer to this hypothetical question is > yes <. Moreover, when it is well-known fact that depression precedes suicidal act. Depression as mood disorder indicates a satisfying treatment illness by current psychiatric guidelines. But, the estimation of suicide is very intrigued intellectual, professional and psychological work-out. In addition, after suicidal act with fatal outcome, it risen many unlimited questions. As far as is concerned to Robin Williams'Suicide, it might to say that the case is an untreated psychiatric example or incomplete treated psychiatric patient. Why? There are many answers, but the crucial reason remains the ignorance and neglectful relation of public toward mental health and mental illness, simultaneously.

The diagnosis of Parkinson's disease could have been the major trigger.
That said, my own father was a gag-writer for Bob Hope etc. and wore a funny mask ALL THE TIME. I believe that he, like me, was bipolar. Also, his mother was probably bipolar and his brother was diagnosed schizophrenic. His parents divorced when he was 14 and his father went off to war for 5 years. Any of these things could have made him assume a funny mask to get by, like Robin W.

I have lived with mental issues since I was very young and also struggled to raise my disabled sister who was mentally challenged . My mother lived in her own prison she could never get up from bed until late in the day. After her untimely death of an aneurism I experienced my own hell being a teenage mother and raising four children and having to live in a neighborhood full of criminal activity but having to work multiple jobs to survive. And as I reflect on all of this, I realize that just trying to fight depression is so hard. It's addictive and if you let it, it can take over your whole life.
Many therapy sessions later requires you to make you reiterate positive affirmations "yes I can" and surround yourself of positive people. Each new challenge brings on new bouts of depression and you find yourself always fighting against that little voice in your head to confront your fears of low self esteem.

Of all the myriad discussions about suicide we've all been a part of in the past, the one thing in Robin Williams's case is that it was just imperious. No chance for argument, no one to say just seek help, no suggestions he simply snap out of it, and certainly no opportunity for anyone to probe his mind endlessly. In his case it would appear those were the things he wanted to avoid for himself, and he did.