When Anxiety Spells Doom: How Harold Camping Makes Us Doubt Ourselves

Tomorrow is Judgment Day, according to the followers of Harold Camping. Believers say they will be taken up to Heaven, while the rest of us anxiously await the apocalypse, come October 21 2011.

I have to ask:

The answer says a lot about the way people deal with self-doubt, anxiety. And this is just one example of catastrophic, prepare-thyselves thinking.

Of course the anxiety that sees people give up their jobs, hand over their life savings, for the likes of David Koresh, or Harold Camping, is enormous.

How does belief influence anxiety?

Belief is central to overcoming anxiety. But the mind is perfectly capable of believing a great many things without proof, or of acknowledging only that which suits an already held belief system/desire.

When confronted by sufficient anxiety, the mind takes whatever turns necessary to cope, even reducing the world to black and white: "on this day, the world will end."

For some people, the flood of panic induced by the thought that they might not be saved, or that they are evil beyond measure because they aren't made of 100% faith/special sauce, is overwhelming. 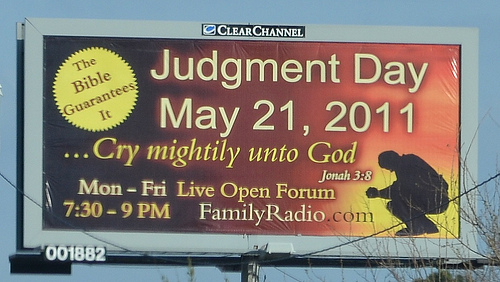 The thought of the end of the world is one so alien, most of us dismiss it. But when someone you trust dictates that it is so, and happening, now, one does not have time to frame a response: In a split second all the terror we feel at the idea of total self-annihilation can come flooding in.

That's a dangerous moment. Especially if you don't have enough support, away from that trusted source, to balance things out.

Most people have family, or friends, or an already well-developed anxiety disorder to depend on, thanks very much. They also have a whole lot of internal things working to counter that anxiety, too: boundary-making skills, the ability to rationalize, etc.

The consequences of anxiety and isolation

Emotional isolation bolsters the belief that one man could predict that which has escaped the rest of humanity for as long as people have been looking forward;

It's about avoidance, and the desire to be spared all future, imagined pain. Which is a powerful desire once it kicks in alongside panic, denial, emotional suppression, and perfectionism.

In the end, whether I believe the end of the world is tomorrow, or 5 billion years away, the fundamental dilemma of how I respond to that remains the same.

The belief systems we use to navigate the world, and guide our decision-making processes, are based, in large part, on that which causes our anxiety. They are designed to protect us but can be used against us because belief is a personal thing: an ego thing.

By threatening someone at the level that they believe it's up to them not only to save themselves come May 21 but to save everyone, you're going to overburden their ego -their primary sense of self- with anxiety. You're going to make demands that induce a sense of powerlessness because any doubt invokes self-reinforcing helplessness, shame, humiliation -not to mention anxiety about exclusion from the communities that love and accept them.

That's a terrible power for anyone to bear.

(Yes, this is armchair psychology. And yes, I'm aware a lot of people believe things like this for many other reasons but in amongst that, and the tin-foil hat brigade, are more than a few who don't have the ego strength/flexibility to deal with double-binds like these.)

APA Reference
White, K. (2011, May 20). When Anxiety Spells Doom: How Harold Camping Makes Us Doubt Ourselves, HealthyPlace. Retrieved on 2022, August 16 from https://www.healthyplace.com/blogs/treatinganxiety/2011/05/when-anxiety-means-the-end-of-the-world-literally

Is Anxiety Toxic? Mind-Body Solutions to Stress?
Helpless, Hopeless? It Doesn't Have to Always Be That Way
3am Wisdom
May, 21 2011 at 2:29 am

Great minds think alike. I've been pondering about this for a week or so since I first heard about rapture. It's just so convenient, isn't it? The end of the world - no more problems ahead. Avoidance or religion? Tough call. xx

Well, as I see it, you don't really have to have anxiety until October 20th, so people can look forward to that day.
I suspect, anyone who would make the assertion is either fraudulent or in need of therapy. And the followers, well their psychology is a mixed bag, but from what I gather cult leaders are terribly persuasive and charming. They can suck in many-a-folk.
I also think this type of belief relieves anxiety for many. People are looking for big answers to their little problems. This is a _huge_ answer. Which takes all the responsibility out of their hands for almost everything.
Because I think the most anxiety-provoking thing in the world is having to make decisions and take responsibility for your life. But if the world is ending, you hardly have to bother with such a thing.
(However, come May 22, they might be in pretty bad shape.)
- Natasha

Hey Natasha,
"I suspect, anyone who would make the assertion is either fraudulent or in need of therapy."
Probably both! =)
But seriously, yes I think that's a big factor in all this - the total surrender of personal responsibility that goes along with this kind of blind faith.
It takes genuine ego strength, and a willingness to test one's sense of self, to step up and face what life brings: good or ill.
It's funny -you would think that, as you said, "come May 22, they'd be in pretty bad shape" but in fact, just the opposite tends to be true for cultists at this extreme.
The cognitive dissonance experienced when evidence (apparently) clearly and incontrovertibly proves the false nature of their belief(s) is generally so overwhelming that they cannot cope with it. So you end up with tragic murder-suicides, allowing people to escape the terror and internal conflicts stirred up; Or people seemingly content to rearrange their ideas to accommodate this 'evidence' into their greater belief system, thus neatly avoiding the necessity of acknowledging it in any meaningful sense.
p.s. cheers for the comment, and congrats on your blog's award!