The recent Colorado shooting has spawned a great deal of media coverage. The flamboyant orange hair, the booby-trapped apartment, the broken social life and the supposed high intelligence of the accused make it an intriguing case. As I have been researching this post, it seems as though everyone with a blog has the proper theory as to why James Holmes killed 12 people at a Batman: The Dark Knight Rises premiere in Colorado.

Of course, I have no more evidence than the others, but I would still like to offer up my interpretation. 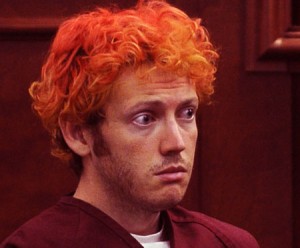 One of the most important pieces I have learned in my experience as a mental health and addiction counselor is that a person’s behavior can never be fully explained by one single trait. Therefore, assigning blame to Mr. Holmes poor social standing and inability to meet women definitely fails in its attempt to explain this bizarre behavior. Of course, not feeling completely immersed and accepted into society can be one aspect in a mish-mash of a million causes, but I find it irresponsible to view it as a sole explanation.

Unconfirmed media reports have stated that Holmes was abusing the prescription narcotic, Vicodin, at the time of the shooting. An incredibly common but terrible ‘solution’ for mental health issues is to self-medicate. And illegal drug use will almost always make the problem worse. Everyone reacts to drugs differently. For instance, I became completely psychotic and out of touch with reality after abusing Ecstacy; which I found initially provided relief from debilitating depression. The same could be true for Holmes. Although it is unlikely that the drug use alone could be blamed for his atrocious actions, it makes a lot of sense to look more deeply into his patterns of use and how it affected his mental state.

Can We Blame Video Games?

Although we are all looking for something to blame for this terrible event, it will surely be impossible to credit it to one single issue. Holmes was reported to be heavily involved in role-playing games online and many people believe this to be the root cause of his attack. As with everything else I have spoken about, this could be a relatable issue but simply blaming video games completely misses the mark.

I’m not an expert on psychosis by any means, but I do have the distinct advantage of knowing what it feels like. However, everyone’s experience with psychosis is different. There is a lot of talk about whether or not Holmes knew what he was doing was wrong, which is important for an insanity defense in Colorado. But I think this definition of insanity also misses the mark. When I was psychotic, I knew the things I was doing were ‘wrong’ according to society. But I also felt that I had a higher calling and that societal rules did not apply to me.

From everything I have read, it sounds as though Mr. Holmes was indeed psychotic, meaning out of touch with reality, at the time of the shooting. But psychosis is a problem that can be brought to the forefront by a number of issues, including social isolation, drug and alcohol use as well as genetics.

When something as awful as this happens, we as a society hope to find one specific thing we can blame.

Addiction to killing game playing can make you become far more socially isolated. Mania can come on slowly and yes it does have an effect on the games you play. When i was manic playing games such as farmville had a more realistic feel to them than just being a type of fantasy game. It brought it more to life and the mania did cause a special effect that i cannot really explain. If you look at Diablo 3 he was playing in which they talk on forums about buying up ammo and weapons, also talk about wearing shields. They become super hero's. Affinity strength and power which happens in mania. His value system he had for his kills you find are in the games. Each time they kill in the game it gives them self worth and they add up their kills. It's not the type of game to play if a person suffers from OCD of harm as the compulsions and mania of schizo Affective would have a dangerous effect. They make human capital in one of the games and destroy worlds. Also in mania movies we watch on TV have a type of psychic link to the actors or a character which is also found in comics. The burnt notes, starting chaos as in the Joker who has strength and affinity but the psychiatrist didn't help him from his compulsions. Utter frustration. The chafs Batman wore in the comic books, so both the games and film had affinity of power of being dressed to play a part. The internet also plays around with your brain chemicals according to psychiatrists and can make the mania worse and cause the inability to sleep.

Chris thank you for your insight and more importantly thank you for sharing it. I can learn a lot from you as a student working toward a degree in Forensic Psychology and a person enveloped by family members suffering the echoing effects of mental illness. Your comment, "When I was psychotic, I knew the things I was doing were ‘wrong’ according to society. But I also felt that I had a higher calling and that societal rules did not apply to me," floored me.
I was raised by a mother who has bi-polar mood disorder. My youngest brother had an undiagnosed mental illness, he died in 1999 while crossing an interstate. One older brother was clearly mentally ill but spent time in prison rather than a mental health facility. In 2007, he ultimately murdered our 77-year-old father and chased our mother with an axe. NOW he is in a mental institution.
My goal is to become a tool for the court to get help for those who need it without having to become a danger to self or others. How long does society have to live, or die, with this archaic standard?

Wow, thank you for sharing such an honest and personal account of how mental illness has touched your life Theresa. I think you will make a fine addition to the field.

[...] people identify picture B (James Holmes, the “Batman Killer”) the most readily as a symbol of mental illness. They are not wrong, of course. Holmes has, it [...]

I agree with everything you said. I believe you left out one thing. The man could also be evil, just plain evil, and we must accept that as true also. What ever the problem is the treatment will be the same, and there in lies the problem. Insanity must be treated differently , not placed in general population, but in a facility trained to handle the criminally insane. A person that has gone so far can not expect to be set free ever, but they do not deserve to be treated like the evil. They need to be where they are kept on their medication, come to terms with what they did and then given some type of work that is constructive and helps to pay for their incarceration. That turns them into contributors to society instead of sucking the breath out of society. They can at least live in a way conducive to feelings of worth instead of shame. Now if they are evil, then the courts know how to handle that, except I don't adhere to the philosophy of death. As a Christian I am bound to bring life. Thank you for your words.

Thank you so much for your comment. I definitely think that you raise some fine points. Hopefully, no matter what happens, he will get the help he needs and can hopefully begin to somewhat repay his debt to society.