Depression in Disguise: Men Who Suffer

As someone who speaks candidly about the stigma of mental illness, I have somehow never mentioned men who suffer from undiagnosed, untreated depression.

For reasons that we can all speculate about individually, men are less likely to label their negative affect and thoughts as depression and are more likely to resort to alcohol or drugs, violence, gambling and even womanizing in order to combat their feelings of mental discomfort.

As I spoke of last week, nearly half the population view mental illness as some sort of personal weakness. I would wager that when discussing men and depression that this number is quite fitting. It goes against everything a man is stereotypically supposed to represent: strong, silent, in control, powerful and commanding.

The website www.mensdepression.org has a mandate of alleviating the stigma surrounding male depression which they place into two groups: overt and covert depression.

Covert depression can be masked, in their view, as workaholism, alcoholism, problems with intimacy and even rage and violence. Overt depression, is the more clinical view of withdrawal from previously enjoyed activities, inability to sleep or sleeping too much, thoughts of suicide and self-harm and difficulty with concentration. 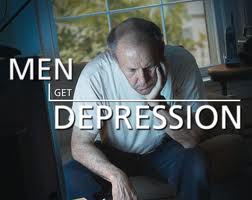 Overt and Covert Depression

However, they hypothesize that it is the covert depression that we really need to start focusing on.

I have always believed that addiction in men is often a signal of an undiagnosed mental health concern. As I work in a treatment centre for men, I have yet to see one client with an alcohol addiction that didn’t at least have some semblance of covert depression. It is often not until these men get some sobriety that they fully come to realize the effect that depression has been having on their thoughts, feelings and actions.

Like anything else in the mental health field, there are no easy answers. But the first thing that men need to do is to put their pride aside and start talking openly about depression. We’re not doing anyone any favours by pretending that we should be ‘tougher’ than depression or that we don’t experience painful emotions the same way that women do.

We need to end the ‘boys don’t cry’ mentality that is predominant in Western society.

The founders of www.mensdepression.org feel that women tend to experience depression in the form of feelings of worthlessness, sadness or excessive guilt whereas men may experience frustration, discouragement, irritability, anger and can even become abusive. Untreated depression in men can also have catastrophic results. Although women attempt suicide at a rate four times higher than men, men complete suicide attempts at a much higher rate.

There is an obvious reason for this statistic: namely, men are more likely to use highly lethal means such as weapons or hanging when attempting suicide. But if we were to open the dialogue, perhaps creating a society where it is acceptable for men to talk about their depression, we may be able to lessen the number of completed suicides in men.

Quit Faking It! What Society Thinks of Mental Illness
'Is It Just Me?' Teens Transforming Stigma
BTHBEZ
May, 31 2014 at 10:04 pm

When depression is rolling towards my path, I can feel it, and see it like a black thick cloud. When it arrives, I stop listening to people. It is if I have turned my hearing off. They could be looking and talking directly at me, and my ears won't hear, but my subconscious mind must, because it answers correctly. I noticed this more often when I am around people that are much younger then myself. I can see it in their faces, as they just stop and stare. But, I have a good humorous line to soften up that awkward moment. Still in the breeze, I hear whispering about me, or giggling about me. I am not the worst depressed person they have meant, but problem is this can just get big with a blank stare or a nasty glaring remark. I wonder if butterflies have depression, if they did would any of the other butterflies, notice, or help it. Would they watch over it, and bring it food and protect it so it will survive the flight to their whole cycle of life. Due to if one died's because of depression, how would this good. In my eyes not very good. We could point out that it is true that butterflies have the same problems as people do. However, this has not been the case. Butterflies are very kind, and a delight to watch their dance into the trees to sleep and eat. Most of joy comes from simple things like this. Keeping the breeze floating the butterfly so it can survive is just another part of nature taking care of all of us.

Depression comes when there is no one to hear you.I guess more important is to talk. I have started communicating which has helped me.

Depression as frequent and common mental disorder exhibits many misunderstanding in medical care system and cause so misconception in public view of points. First of all there is difference on phenomenology of men and women depressive patient. The main clinical picture of depression in men has to take out in this paper, which one is somewhat different from depression in women. But the psychiatric treatment of depression is similar in two gender. This veracity indicates an impassable stumble of satisfactory treatment and management of depression. You are right!. Therefore, it ought to be careful in the treatment of any somatic disease, particularly in those with unwelcome course. Every men patient with hard and stubborn somatic symptoms should to be subjected from psychiatrist. This and your observation would contribute to treat more successfully depression in men with hidden and turmoil signs.

Beautifully and truthfully stated.
I was just thinking about my dad, he (I believe) was an alcoholic by the time my brother and I were born (twins, I'm the daughter). I have always believed him to have suffered from depression from physiological reasons, just to mention one I believe he was a type 2 diabetic, (no insurance but he prolly wouldn't gone anyway. There was a time period where he was out of work and very angry and abusive, which has left scars on me, and mostly my brother -he got the worst part of it.
But, our dad was a loving man, and I know he hated the way he was when he was out of control.
Thank you for this great article. I hope dialogue will open up for the men, because if there is anything I could have changed about my life, with all I've been through - it would be to have gotten help for my loving dad.
Rann Patterson
Cancer Editor, BellaOnline.com
@RannPatterson (Twitter)
Cancer survivor, twice
Mental health advocate
Healthcare advocate

Thank you for sharing so openly and candidly about your experiences. I've just followed you on Twitter! Keep in touch.
Chris