My Story of Schizophrenia, Schizoaffective Disorder, and Marriage 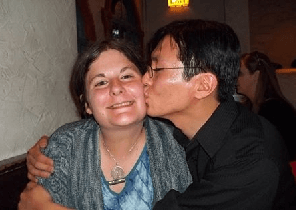 My Great Aunt Elsie, who passed away about a year ago, used to use her German grandma vice grip to pull my husband, Tom, down to her eye level at family gatherings. She’d ask him, “Do you still love her?” And Tom would say, “Yes, of course I still love her.” And she would say, “Good. Because she takes a lot of patience!” When Tom and I got my anniversary band this year, we had the word “patience” engraved on the inside. Also, whenever we have a drink, we toast to Aunt Elsie -- and to patience.

I do take a lot of patience. There was my meltdown at our wedding (Schizophrenia, Schizoaffective Disorder, Overstimulation) that I’ve written about and about having had Tom take me to the emergency room because I was suffering from intense suicidal ideation. Also, at one point I was on a medication that sedated me so much I didn’t wake up when I had to pee, so I peed in bed. Tom had to get up in the middle of the night when he had work the next morning to help me clean up. This happened a few times before I started wearing adult diapers to bed. I switched meds, partially to avoid this disaster, and I don’t need to wear adult diapers to bed any more.

Feeling Lucky About My Marriage

I recently posted on Facebook, “I’m lucky to have a baby who not only brings me food when I’m at work, but sits with me until the end of my shift.”

Tom is able to do this because he works during the day and I work at night. And I am lucky. We’re both lucky to have our love. Tom wouldn’t do everything that he does for me if he didn’t love me very much. And I love him to the moon and back. He grew up in a family where love didn’t always show and I am making up for all those years. Tom makes me so happy and he lessens the burden of my illness. Most importantly, he gives me something to live for. He has told me that the fact that I make him feel needed means so much to him and gives him a sense of purpose.

In the movie Juno, 16-year-old Juno is asking her father about what it takes for people in love to stay together forever. Juno’s father tells her that the right person is going to love you for who you are, ugly, pretty, good mood, bad mood, the right person is still “gonna think the sun shines out of your ass.” That’s what Tom and I have. And after almost seven years of marriage, I know we are both very lucky.

Thanks for your comment. NAMI is a great resource.

I’m schizoaffective-depressed, going through a divorce after 27 years because he frequents prostitutes. Family likes him better than me and I feel alone. I feel suicidale cuz no one wants to be around me. I’m hurting.

Kim-- If you're feeling suicidal, please visit this link for suicide hotline phone numbers:
https://www.healthyplace.com/suicide/suicide-hotline-phone-numbers
I know you're hurting, but you are a precious human being worth fighting for and there are people at the other end of these hotlines who want to help you. Please call. My best to you, Elizabeth

I'm sorry you're going through this. No one should have to deal with that.
I have the opposite problem. My wife is schizoaffective and every other month she threatens to divorce me because she has paranoid ideations that I'm cheating on her with the neighbors, coworkers, relatives and/or prostitutes. We've been together 26 years and I've never cheating on her once.

Please help... Need advice.. My husband is schitzoaffective and bipolar. He is happy one second and then snapping on me the next. What should I do? He doesn't want help and he doesn't think anything is wrong with him.

First of all, I think you need to assess your needs. Is this relationship serving you well? Just because he has a mental illness doesn't give him a free pass to treat you badly. So maybe you could tell him that he's treating you badly and unfairly and that you feel you need couples therapy. Also, here are some resources that may help: https://www.healthyplace.com/other-info/resources/mental-health-hotline-numbers-and-refer… I hope that helps!

Please. Help. My daughters father and I have been together almost five years we just moved back into a shelter program together after living separately cause of our finances and best interest kg our daughter being in my parents house who hate him, so it is alot of pressure and RE learning one another along with all the issues of being in shelter. Anyway he's been exhibiting a whole new personality . He will be nice and level headed for a week and then all of a sudden he curses me out makes me feel pathetic and I get depressed and wish I would just not wake up . I suffer from depression and cutting myself and we both are heroin addicts in recovery. It is really trying and I don't know what to do anymore. I believe he is schizo affective and he does too he has appointments n he is on meds for lithium but they need to be increased. Am I ruining my daughter and I life for nothing? Is there any hope of relief in site?

Check out these hotlines. One or more of them should be able to help you. https://www.healthyplace.com/other-info/resources/mental-health-hotline-numbers-and-refer…

Hello my name is holly recently me and my boyfriend got engaged he has schizophrenia and I deal with this everyday the mornings are the worst part of my day he calls me names he tells me im going to be the death of him im the cause of his panic attacks I cry all the time as the day goes by he has taken his meds and he calms down....im constantly accusing him that he is cheating on me because of the way he talks to me we have took our rings off several times when we argue and always put them back on later everything I say or do he over analysis my ever move...I say things the wrong way he can't be in social environment s he thinks everyone is out to get him he tells me he loves me with all his heart but at the same time he says the cruelest things that hurt me to the core but I know he doesn't mean it...I need help in trying to be more understanding any advice???????

Would you be okay with your husband's behavior if he didn't have schizophrenia? I am offering these links, not in judgment, but in support and to let you know that you are not alone.
https://www.healthyplace.com/other-info/resources/mental-health-hotline-numbers-and-refer…

Holly please message me I need your support. My spouse has schizoaffective disorder and my life is written in your words. I feel like nobody understands my pain.

I'll gladly talk with you about it. I go through the same thing as Holly and you. I love my man to death but sometimes I feel as though he may be the death of me....

Dear Shelly,
Thanks for your comment. I think all people, regardless of whether or not they have a mental illness, feel this way about their spouses.

My name is elindabeal and I'm married to a man that is skizoeffective we been married for 17years and it can be so hard to deal with my husband recently he moved out and got his own apartment and he ended up sleeping with other women and it hurts so bad a couple of days ago he started hearing voices and crashed his car and he ended up in the mental hospital and he was doing and saying a lot of things that wasn't him so now I don't no what to do and I honor my vows and I also love my husband I just don't no how to deal with him.

Elizabeth,
your post really touched a raw nerve with me. My psychiatrist says i have schizoaffective disorder with bipolar features. My life feels like a nightmare. And suicidal ideation? yes, well i have had that for years. I don't want to trigger anyone, but suffice it to say it has been absolutely awful. Just having this illness is so difficult to the point that i have given up thinking that i will ever find any man that would love me and love me that much the way your husband loves you. Your story is very touching.