Have a Heartbeat? Well, You're Crazy Too!

OK. First, I am not insinuating that those of us living with a mental illness are crazy. Usually, we are not. What I am stating, is that too often it is assumed we are crazy. People hear the words "mentally ill" and sometimes they instinctively picture things like: homelessness, drooling, talking at inappropriate times or not talking at all, dirty bathrobes, dark hospital corridors and a trembling body. 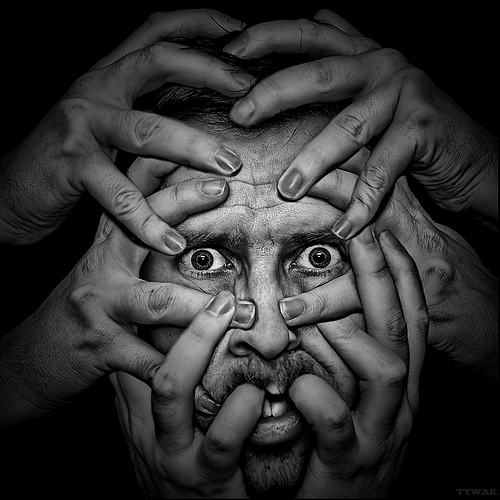 And that makes me laugh in an evil sort of sarcastic sounding way. I do have an ugly bathrobe--I'm wearing it right now, unfortunately--and sometimes I do say inappropriate things. But that's because I'm me and I'm "weird" in my own way. Just like you are. But not because of my mental illness.

Here's what I think, and many sort of sincere apologies if it is deemed inappropriate: If you have a heartbeat, walk and talk, you're a little or a lot crazy too. That's just being human and I want to explore why.

Four Reason's Why We're all a Little Bit "Crazy"

I'm starting to really like lists. They're pretty damn neat, pardon the pun. It reminds me of being in college again; taking rapid-fire notes in class and organizing them into categorical lists once I arrived home. That might have been a little bit weird?

And so here it is, four reasons why we are all a little bit off our rocker (even your neighbor who seems so sane he/or she is probably very boring):

In summary: The next time someone calls you crazy, ask them what they think of the impact global warming has. It's likely you will be met with a fair bit of silence or---and this is fun--an intelligent conversation. Or talk about reality TV and that new Brad Pitt movie that I won't pretend I will not see.

Let's conclude this with a fun quote:

"I think we're all mentally ill; those of us outside the asylums only hide it a little better (and maybe not that much better after all)."

APA Reference
Jeanne, N. (2013, June 20). Have a Heartbeat? Well, You're Crazy Too!, HealthyPlace. Retrieved on 2021, April 13 from https://www.healthyplace.com/blogs/recoveringfrommentalillness/2013/06/have-a-heartbeat-well-youre-crazy-too

I just discovered your blog and I really am enjoying your message blended with humor and a positive approach to life. Thanks!

Well said. Every human is unique, and we each possess little (and big) eccentricities. There is one thing that all humans have in common: the tendency to judge what's different. Some hide it better, some don't act on their judgments, but we all do it. Using terms like "crazy" and "insane" to derogate the eccentricities of others further stigmatizes those experiencing mental illness. Your post sends the accurate message that we all should sweep off our own doorsteps before trying to sweep others'.