When typing the title of this blog, I immediately picture Jack Nicholson's character in One Flew Over the Cuckoo's Nest. The 'crazy' one locked inside the 50's-inspired psychiatric hospital. The character considered less crazy than the rest of the patients. But I'm pretty sure his character---based on the glorious book of the same name---probably thought he was sane. Sort of like how I think I'm stable when I can't move from bed.

Side-Note: Yes, that's a brilliant-in-my-humble-opinion image from the film below. 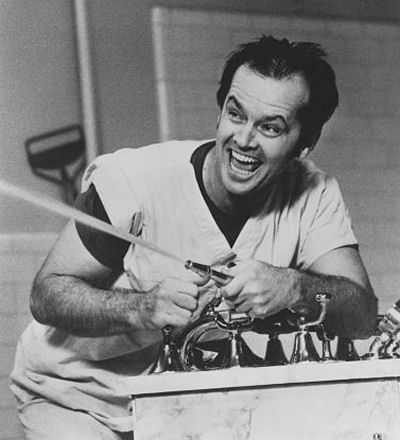 I realize that many readers of this blog--myself included--live with a mental illness. Further to this, I recognize that I may have done one or two irritating things (probably both):

A. Referred to a movie which some people may not have seen and thus losing some readers and also dating myself--in all of my twenty-eight years of movie watching. But, having said this, it's a pretty great movie, and an even better book, so you can't blame me, right? OK. Great.

B. Told you that if you live with a mental illness you might be, at this very moment, off your rocker. You may be--we may be--walking round' in circles and not knowing it; perhaps our eyes are half closed when we are certain we can reach for the sun!

Jokes aside, this blog is meant to focus on a serious issue: Often, when you live with a mental illness, you may not be acutely aware of when you lose stability.

And Learning to Accept Feedback

Mental illness is so insidious--almost evil in the way in which it can slowly encompass your mind. One day you may be making breakfast and on your way to work. All seems right in the world. A month later you might not have had breakfast in three weeks. You may be lying in bed on Monday morning instead of walking out the door with a thermos full of coffee. Mental stability can change so slowly you may not recognize it.

Let's use the example of depression: It does not happen overnight. It can happen over the span of years, days, and months. Sometimes, hours. It is because of this that it can be hard to know if we have fallen from grace. Or just fallen into a depressive stupor.

Often, those closest to us notice first. They might hesitate to tell us---nobody likes to be told they need help---but at a certain point they do. And you might get angry, but you will likely reflect on the past month. It is always with great sadness that I realize I am no longer well.

Common signs of relapse: Change in regular sleeping habits, appetite, ability to socialize and be a part of the world, a body and mind that cringe when confronted with a toothbrush and shower. The work that can be!

This is why it is important---vital to our recovery---to listen to those who tell us we need help. Even if we want to throw things or pull the covers over our head.

I have learned that it's important to have open dialouge with those whom we trust. Tell them that if we show signs of relapse to sit us down and be honest. After all, if you noticed a loved one was becoming ill, wouldn't you want to talk to them about it?

Decide who you can trust and make a personal plan of action; put self-care into high gear and make an appointment with your mental health team.

In summary: We're all a little crazy, even the sanest person among us, but when you live with a mental illness you just need to be more conscious.

(PS. Read the book or watch that movie!)

I've been mentally ill since I was 19 yrs old. I was diagnosed Bi-Polar 1 and at times it's really been Hell. I've become manic at times and those are the scariest episodes. Where I've seemed to have lost touch with reality and gone into my own make believe world of paranoia and people persecuting me. There's been times when it's felt like the whole world wanted me dead. I've heard voices. I've never had visual hallucinations ( Thank-God ). These episodes seemed to have just come out of no where. It's scary because they are unpredictable. I've never felt as though I've wanted to hurt anyone. I've always been the one who people wanted to hurt. And the voices made it seem so real it was Incredibly frightening and tortuous to my soul. I wish no one any type of mental health issues because I know how horrible they feel to that person. Good luck my fellow individuals on this planet....

Good article. It's amazing how badly the wheels can fall off of the wagon. Life seems to be going swimmingly until all of the sudden you wake up one day as Rory Barzee.

i go to a.a. every day. why? because i want to be happy.not sick. thank you god.i want to be healthy, mentally, physically, spiritually and emotionally. i have been blesses>

Amid numerous difficulties to recognize and to manage any mental illness in appropriate way, the ignorance stand point toward its indicates crucial impediment. This catastrophic attitude on mental health and/or mental illness encompass mentally ill people and others, which one creep current psychiatric treatment of respective mental disorder. It goes without saying, the outcome of every mental disorder would be horrible. For all that, daily psychiatric practice has shown that due psychiatric treatment of any mental illness gives satisfying results. To achieve this aim,it ought to accept the necessity of psychiatric treatment, which one is longstanding and boring procedure. In this direction, your remark to accept without shame objection from others contribute to soften this damn vice of mental pathology.

I certainly enjoyed Natalie's articles.Also I'm sorry to see her her go but nothing lasts forever I suppose.Good Luck natalie in whatever you pursue.

Thank you all for your wonderful comments!
Natalie