A Letter to Rand Paul re: Disability Benefits for Mental Illness

A Mental Illness, Anxiety, Can Feel Like a Heart Attack

You're a doctor. Think back to your fourth year of medical school. Imagine that a patient shows up at the emergency room who is able-bodied but complaining of chest pain, racing heart rate, shortness of breath and high blood pressure. Would you send this person to work and say their symptoms are normal, or would you evaluate for a heart attack? Now imagine having those symptoms every day. That, Senator, is a disabling anxiety disorder, not the normal pre-work jitters, but a very real medical condition. Post-mortem tests can prove the presence of mental illness, including anxiety, although to the best of my knowledge we're not advanced enough to biopsy the brain of a living person. 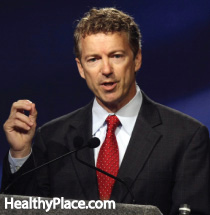 Posttraumatic stress disorder (PTSD), which I have, is a condition we're seeing more of as our service members return from combat. While their wounds are not visible, they're just as real. PTSD is an anxiety disorder, by the way. Would you say the veteran who never really returns doesn't deserve disability because they aren't paraplegic or quadriplegic? Did you know that 22 veterans commit suicide each day because of logic like that? And that the threat of losing that disability check has scared many battle-hardened veterans?

Fourteen percent of the people on disability or on it for mood disorders, not half. Do you have any idea how hard it is to be ruled disabled by a mood disorder? We'll take my case. I'm a college-educated professional writer who has posttraumatic stress disorder and schizophrenia. On a good day, I can hide my symptoms. On a bad day--well, let me tell you what the Army said--"Unusually intense anxiety when stressed leading to suicidal thoughts." Try working with that monkey on your back. If you can't, imagine trying to get your work done with five different people talking not-stop gibberish to you--that's what schizophrenia is.

Getting Disability Benefits with a Mental Illness

Incidentally, it is very difficult to get on disability. You almost have to have a lawyer--I'm a proud Baylor University graduate and I had trouble understanding the paperwork. If you can't afford a lawyer or find one who will take your case--no lawyer would take mine because it wasn't a sure thing--you are on your own and virtually certain to be denied. Either way, you have to see a state-appointed doctor, as well as get all of your relevant medical records and reports from any employers. After that, you wait--my case took well over a year. I was rejected the first time; my state rejects 95% of all applications the first time. Of those appealed, it rejects 90%. Nationwide, about half of all applications for disability are rejected, and of those appealed, there is a three-in-five chance it will be approved. The appeal typically takes about 400 days--during which point in time the person may not have an income because their disability is too severe for them to work.

By the way, someone with the maximum disability benefits--$900 a month in my state--received less than a full-time minimum wage earner. People on disability live in poverty, which is part of the reason the program has a fraud rate of less than 2%. Many of us would love to work, but risk losing Medicare and Medicaid, which cover our mental health treatment. Before Obamacare, which you plan to overturn, private insurance companies could refuse to cover us due to a pre-existing condition and were not even required to cover mental health. So if we work, we risk becoming so sick we can't work and then being financially wiped out as opposed to eking out a living. This happened to me when I was hospitalized without insurance due to my mental illness. Many of us are trapped in this limbo.

Before you open your mouth about things you know nothing about, do your research. I invite you to live my life for a week before you and Congress cut my benefits.

APA Reference
Oberg, B. (2015, January 19). A Letter to Rand Paul re: Disability Benefits for Mental Illness, HealthyPlace. Retrieved on 2022, August 15 from https://www.healthyplace.com/blogs/recoveringfrommentalillness/2015/01/an-open-letter-to-senator-rand-paul

On My Bad Days I Hallucinate: What Mental Illness Isn't
What Is Victim Thinking?
Vicki Songer
March, 28 2015 at 12:29 pm

VERY WELL SAID Becky Oberg, I really wish more people and Family would just try to understand our conditions...My husband thinks that since I very happy in my life right now I have no reason to be depressed.. I have told him more then a handful of times that Mental Illness is so totally different then that. That we have a chemical imbalance in our brain and they still don't get it. That in it's self is VERY depressing!!

I have a son and a husband who suffer from mental disabilities. Try being placed in the middle and see how it feels. You say this isn't real -- you need a reality check. Climb into their lives and see how it feels. My husband doesn't make that much money. My son qualifies but he isn't able to receive benefits because they claim his wife makes too much money when in reality they barely scrape by. Where is the fairness in any of this?

We ate strong warriors fighting a silent battle daily. This is why we are overlooked because we are fighters. All we want is to get better. Having benefits would help this but no one understands. They think we are not trying hard enough or we just have the blues or are shy. Unless you're directly affected you can hardly understand. I have great insurance and have to worry about my mental health coverage. My deductible tripped and medications doubled. I can no longer afford counseling which was finally helping me out. :-[

This letter says it all! Great job!