On My Bad Days I Hallucinate: What Mental Illness Isn't

When my COBRA expired, I sought insurance (particularly to pay for mental health services), only to be denied because my mental illness was considered a pre-existing condition. Desperate, I turned to a Christian health pool, and asked if they covered mental illness. I was told that everyone has a bad day and that I should use herbs. I bit my tongue to avoid saying, "On my bad days I hallucinate." Mental illness is not a "bad day."

What Mental Illness Is and Isn't 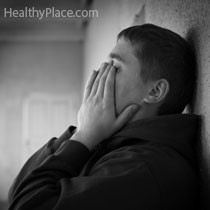 It's 2015 and there's still a lot of ignorance about mental illness and people have no idea about what not to say to a person with a mental illness. Many people think it's a lack of faith or "a bad day." But mental illness is neither one. Mental illness is a very real, very treatable medical condition often caused by a chemical imbalance. That's why organizations such as the National Alliance on Mental Illness (NAMI) refer to mental illnesses as "brain disorders."

In this video, I talk about what mental illness is and is not.

APA Reference
Oberg, B. (2015, January 15). On My Bad Days I Hallucinate: What Mental Illness Isn't, HealthyPlace. Retrieved on 2022, June 30 from https://www.healthyplace.com/blogs/recoveringfrommentalillness/2015/01/on-my-bad-days-i-hallucinate-what-mental-illness-isnt

Common Sense Can Cause Mental Illness, Depression Stigma
A Letter to Rand Paul re: Disability Benefits for Mental Illness
bdlheart
January, 25 2015 at 3:13 am

Thank you for sharing this. What would make mental illness easier would be understanding. I too have been told to just be positive. If only the solution was so simple.

What mental illness is, IS Severe depression, and it is really hard when people tell you it's, because your not grateful enough, and all kinds of reasons like that when you try to explain to them the chemical imbalance, they just don't want to hear it.