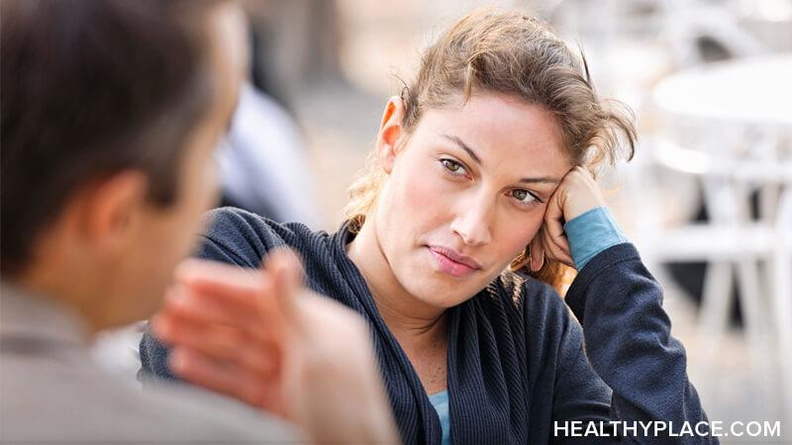 I met a guy who could make me laugh and was the most romantic man I'd ever known. We became friends and eventually got engaged. Unfortunately, he had diagnoses of borderline personality disorder and bipolar disorder, and went off his medications, saying "Medications don't do anything Jesus can't." That's when the nightmare started. He became emotionally abusive and told me it was my fault--and I believed him. 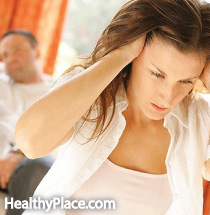 People who believe abuse is their fault often have traumatic upbringings. They compare the abuse inflicted during childhood to the abuse in the relationship, see themselves as the common factor, and blame themselves and try to become better. This is never good enough for the abuser, who uses shame and guilt as weapons.

The reality is this: It's not your fault. People shouldn't ask why you stayed as long as you did or what you did to deserve such horrid treatment. They should be asking "What's wrong with that abuser?" and "Why hasn't the violence stopped?" No one deserves abuse, let alone to be blamed for it.

I Can't Do Anything, I'm Helpless

When I was in that abusive relationship, I often felt helpless. I didn't believe I could do anything. It's what psychologists call "learned helplessness." But the belief you are powerless is a lie. You do have options.

Leaving is easier said than done, and it’s often the beginning of a lengthy battle. But it's the most empowering thing you can do.

There are many excellent resources online about how to leave an abusive relationship. The ones you can trust help you realize that yes, leaving is a possibility, and yes, it is difficult. A social worker told me that the average victim receives 17 interventions before leaving for good.

Some people, especially religious leaders, believe that it is possible for the abuser to change. Maybe it is; maybe it isn't. In order for the abuser to change, boundaries need to be set and consequences need to be real. I gave my ex an ultimatum: go back on the medications and get into counseling or it was over. It was one of the hardest things I'd ever done, but I still remember the relief I felt when he left.

Up until now, I didn’t think I was being abused. True, we’ve had our fights, which often result in both of us screaming at each other, him storming off to sulk or me breaking down into tears, which he considers an effort to manipulate him. I thought that was normal for a serious relationship.

There are other warning signs, but I am a master at justifying them. Sure, he often shot me with his pellet gun, but he always laughed after he did it—it was just a joke. He often called my cell phone to check up on me—it was sweet that he was so protective. And he often coerced me into activities I found distasteful, but I was being submissive, just like the Bible said. He was romantic, charming, witty—but deep inside, I knew something wasn’t right. Domestic abuse is abuse, regardless of how sweet the so-called 'honeymoon phase' is.

Abuse victims often believe that the abuse is not a big deal. This is often because they believe the abuse is their fault. But it is a big deal because abuse always escalates. Your abuser will not be happy until you are dead. Better to assume mistreatment is serious and be wrong than believe it is minor and end up in the emergency room or morgue.

Don't believe the abuse lies. Learn to argue with them and overcome them. It's the best thing you can do for everyone involved.

Police Shootings of the Mentally Ill – We Matter
Ruminating Can Harm Your Mental Health Recovery
Tanya
March, 13 2019 at 4:23 am

God my life is the same 13 years of abuse physical and emotional. Only just left 5 days ago. Something just clicked and I thought I cant carry on. I am disabled and struggling but I am not scared and on edge.

I grew up in an abusive home. I was the eldest of five that also witnessed my father abusing my mother. He never blackened her eyes and we never saw any bruises. She told me years later that he hurt her where it didn't show. Growing up I learned never to let him hurt me like he did my brothers and sisters, but I allowed him to destroy my self esteem and any kind of self confidence I had. I believed that if he ever hit me like he did the others I would physically die. I learned to also survive by never sharing my feelings and if he said something cruel or picked on me. I wouldn't speak to him until 2 weeks later. By that time it didn't hurt as much and I stuffed it down. I learned another way to cope was emotionally eating. I grew up to be a very insecure person that people including my mother thought was "shy" The truth was I never felt safe and had that same protective shield with others. Until I observed them long enough that I felt safe. I was a single mother of 1 at the age of 23. I have identified I have a pattern of choosing abusive men for partners, but married once after living with him for 3 years! I thought I knew the "real" person, but I was wrong! This marriage lasted 2 yrs and when I realized the truth. I left while he was at work with my then 2 children. I went through a horrible battle with him and he did everything he could to "destroy me." Which is what he told me he would do.I managed to divorce him after a long separation and he was given visitation because I had no proof of his abuse. I became a single mother again and was working after going back to school. The teacher was very emotionally abusive towards me and triggered me (flash backs about my father). I couldn't handle the pressure with her and my ex's visitation rights every 2nd weekend and had a break down and was assessed in the hospital. After 2 weeks I was put on a lot of medication and went back to raise my girls. My mother wanted me to live with them, but I knew my dad would cause major problems. Long story short my ex remarried, the visits became less frequent as my girls grew older they refused to see him. I gradually became well again and my girls grew up and left home.
My ex got away with paying no alimony, he only paid for "his daughter" and when we lived together for those 3 years he lived off me. And he also decided he didn't want to work anymore even though he was a mechanic and made good money. He wanted to live off my assistance and wouldn't take no for an answer. That is until somebody told them (I believe was my mother) and reported me and I ended up paying back money monthly. To which he said it was no big deal and that he would work from now on.
But I am a big believer in Karma and one day after he was remarried for awhile he decided to buy some land and build a house. Well the first time he tried the contractors walked out because he is not a very honest person wihen it comes to money. The second time there was a problem with the electricity. And they had to live in a shack. The third it was finally built and it burnt down on my Birthday!
Today I am much better but 2 years after my ex and I had divorced. I met somebody else and he was the WORST one of them all! He humilated! Degraded! Lied! Cheated! Raped and forced me to do sexual things I said, "No!" to. After I finally got rid of him! I tried dating again but I was never the same and never dated again...It is now several years later and even though I have had other opportunities there is no one I TRUST to get that close to me again. :(

Domestic abuse is abuse. I come from babyhood,childhood and adult ab use. It is not a joke. It leads to a very painful life because its so tough to let go. I had always wanted to have 4 children but was afaraid when the time. came.It's too late now. It took me 3 years to get away from my adult abuser, left a few times then was afraid of being alone, went right back, The last time I left he raped me , punched me then fell asleep. I went to work in the morning and never went back. Best thing I ever did. Despite the abuse I found myself lonely. I now know that that is normal feeling after a long relationship, despite how bad it was. Till this day it was the best thing I did. I probably would not be here now if
I didn't leave. Please leave an abusive partner.It takes awhile but it gets lots better.

Even with death threats, I couldn't walk away the first three times I tried! Eventually he left me for his previous wife. No one in his family believed me , even his previous wife's before me. He lied to everyone, saying everything was my fault, that we divorced years before. He called the cops on me and all. His daughter contacted me 6 months later, saying he was dying of heart, and lung diseases. Yet another lie. I excepted the plea to try again. It lasted 3 days, the forth day I called my doctor as soon as the office opened, got in an hour later, then escorted to the er. I was told by the mental health evaluator that I had two choices. Hospital or go stay with a friend I could trust. Either way I was not allowed to go home as long as he was there. I realized as much as I hate divorces, that I had to dissolve my marriage! With no income it has been very hard to live. I finally got a job helping a friend, as he needs help. Been terrified to divorce him. I got a PPO and even the courts can't give him my location. I have not been able to come up with the money to divorce. These 3 lies, I did believe for 2 years. I can't enjoy things I once did because they trigger my PTSD! I am soon running out of places to stay and will be homeless in the next week or two. Because I have lived with him as husband and wife for 20 years, and separated for 3 years, I am going after alimony, and half of what he sold our home for! Let him refuse to pay, and he will do that, he will be held for contempt or refusing to pay. I am to busted up physically and mentally to work! Also during the divorce I want to change my name too!