PANDAS (pediatric autoimmune neuropsychiatric disorders associated with streptococcal infections) is a disease that can account for psychiatric symptoms, but there is stigma around PANDAS. Recently I received a text message from Amber Becker, one of my readers, asking about my time in the state hospital system. Her daughter McKenzie has several psychiatric and developmental disorders, has been in and out of hospitals, and written off as untreatable. The State of Indiana wants to make her a ward of the state and put her in one of the hospitals I was treated at. Her fear is that if Indiana puts McKenzie in the state hospital, she'll be constantly sedated or repeatedly put in physical restraints. But here's the plot twist--PANDAS may be the cause of her problems. But there are no PANDAS specialists in Indiana, and even if there were, they're not covered by her insurance.

According to the PANDAS Network, PANDAS occurs when the brain becomes inflamed as the result of strep throat. Estimated to affect one in 200 children, PANDAS symptoms include obsessive-compulsive disorder, anxiety, tics, personality changes, decline in math ability and handwriting, restrictive eating, psychosis, and mood swings. There is still much debate over how to stop the syndrome, which can cause permanent damage, but treatment includes long-term antibiotics, intravenous immunoglobulin treatment, and plasma transfusions. 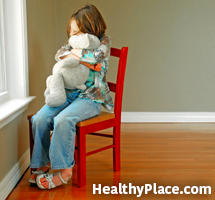 These facts raise a few questions, most notably "Why have we never heard of this?" and "Why are we allowing it to affect so many with hardly a fight?" If 1 in 200 children had cancer we'd demand more research for a cure, better insurance coverage, more treatment professionals, and easier access to care. We'd be aware of the disease and fighting it with everything we've got. But there's hardly a peep.

Is it the stigma associated with mental illness? The rules are different for care for physical illnesses and mental illness--which makes getting care for McKenzie even more difficult.

According to WTHR, Indiana now has only two state psychiatric hospitals, with 67 beds available for children. It's worth noting that the National Alliance on Mental Illness Indiana chapter estimates that between 71,000 and 90,000 Hoosier children suffer from mental illness.

Private facilities are available, but expensive. "McKenzie's treatment would be anywhere from $800 to over $1,000 per day at those facilities," Amber told WTHR. "That's outrageous." Private facilities can also deny patients--and that's happened to McKenzie. She's either too young, too aggressive, or too mentally ill.

Sadly, the Indiana Department of Child Services (DCS) usually gets involved only when the child's behavior is severe enough to warrant arrest. Amber worked with the police and the Morgan County Prosecutor's Office to document McKenzie's outbursts, which at least one emergency room labeled "temper tantrums." She even took it to her Congressional representative. The prosecutor filed a lawsuit against DCS to get McKenzie services from the State without being made a ward of the State. The judge blasted DCS for its failure to help, ordered the State to pay for treatment, and the State later established the Indiana Children's Mental Health Initiative (CMHI) in an attempt to fix a broken system.

However, this has not eased the struggle for Amber and McKenzie. The best match is a facility in Lafayette, which is 80 miles away, has a six-month waiting list, and still can't meet McKenzie's needs.

"Specialists have already told me there are no facilities in the state that can properly address and meet McKenzie's needs. They're all out of state and don't work with our program," Amber told WTHR.

We wouldn't tolerate this for cancer or HIV/AIDS. Why is mental illness different?

How Do We Fix a Broken System?

McKenzie's story hits home for me because of similarities with my own story. I grew up in Indiana during the 1980s, and my symptoms manifested in childhood. My parents were told by multiple doctors that there was nothing they could do--there was no treatment for children, so they'd have to wait until I was an adult. Once I was an adult, I was written off as untreatable. One mental health professional told my mother "She'll drift in and out of hospitals until they're tired of treating her." After I came perilously close to racking up federal intimidation charges, I was court-ordered to receive the treatment I needed--the facility didn't accept voluntary patients.

So it outrages me that Amber had to get the police, the county prosecutor, a judge, and Congress involved just to get told something other than "There's nothing we can do; she's too sick." It angers me that she could be forced to surrender McKenzie to the State just to get the wrong kind of treatment. But I--we--must do more than be outraged. We must advocate (It's Critical To Be An Advocate For Those With Mental Illness).

How do we fix a broken system? The first step is to recognize that it is broken. The second is to demand parity, or at the very least adequate, care for mental illness. The third step is to make it affordable for people to specialize in mental health, like offering student loan forgiveness for public mental health professionals. Finally, we must have an adequate support system for parents of children with mental illness.

We owe it to McKenzie and the millions of children like her.

To help McKenzie, visit the Facebook page or the GoFundMe page.