Three Things About Alcoholism I Wish I Knew Before Treatment

Alcoholism Is a Disease

This is Alcoholism 101--alcoholism is a disease. Many people take this for granted and are able to see alcoholism as a sickness and not a moral weakness. I am not one of these people.

I grew up around alcohol, but I also grew up conservative Christian. Alcohol was a sin, and an alcoholic was an unrepentant sinner, a disgusting hypocrite, someone who hated God, and lived his or her life that way. Alcoholics were morally weak people who used this disease as an excuse--I'm not the problem, it's my disease. My disease makes me drink; it's not my fault. All an alcoholic needed was to get right with God and stop drinking. Everything would be fine with just a little discipline.

Then I became an alcoholic.

Alcoholism is the loss of control over one's drinking. An alcoholic has a physical allergy with a mental obsession. An alcoholic doesn't have a choice. Alcohol is an addictive, progressive, and deadly substance for people with alcoholism. An alcoholic has to have alcohol--there is no other way. No wonder the disease results in jail, institutionalization, or death if left untreated.

You Don't Have to Drink Every Day if You're an Alcoholic

Alcoholism is not about daily binge drinking, although that certainly happens. Alcoholism is about what happens when you drink, not how frequently you drink. My alcoholism makes me an unpredictable drinker. My active addiction was basically daily drinking in moderation, with an occasional loss of control--by "occasional" I mean once or twice a month I got drunk. 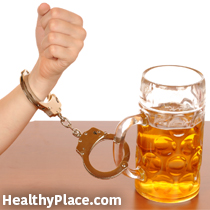 The best way to know if you're an alcoholic is to ask yourself if you have to have it and at what cost. For example, I had to have alcohol--my worst fear was sobriety. I'll never forget wandering around in the cold one Christmas, searching for alcohol but unable to find any since it was illegal to sell alcohol on Christmas at the time. An alcoholic is also willing to skip basic necessities such as food, medication, and rent in order to have alcohol.

It's not how frequently you drink; it's what happens when you drink.

Not All Alcoholics Are on Skid Row

We all know the stereotype about the Skid Row alcoholic, and that enabled me to deny my disease for a while. I was honestly surprised to learn that something like 95 percent of alcoholics are functioning. Most alcoholics are able to balance their addiction and the rest of their lives for a time--in Alcoholics Anonymous we call them "high-bottom drunks." Homer Simpson is an example of a functioning alcoholic.

It is possible for an alcoholic to hold down a job, live in a nice house, pay the bills on time, and generally keep their disease a secret. Alcoholism is not confined to one socioeconomic class. Alcoholism is defined by what happens when one drinks, not by the size of the paycheck or house. Not all alcoholics are on Skid Row--some are in the suburbs. I know of one doctor in St. Louis who drove drunk so frequently that the police offered to transport him home from the bar.

So there are three things I wish I knew about alcoholism prior to entering treatment. What do you wish you knew about it?

APA Reference
Oberg, B. (2016, January 18). Three Things About Alcoholism I Wish I Knew Before Treatment, HealthyPlace. Retrieved on 2022, June 27 from https://www.healthyplace.com/blogs/recoveringfrommentalillness/2016/01/three-things-i-wish-i-knew-about-alcoholism

Hmm... I;m not so sure that an alcoholic doesn't need to drink every day, or almost every day. I think there is definitely a difference from one who is alcohol-dependent (an alcoholic, like me) to one who can't hold their drink very well (a.k.a. a lousy drunk),. Although despite being two years sober myself, I do agree that once an alcoholic, always an alcoholic.