Should Force Be Used Against Someone with Mental Illness?

Is Force Necessary Against Someone Living with Mental Illness? 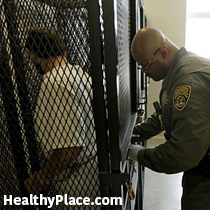 I have personally witnessed police officers abuse their power when dealing with someone with mental illness (Mental Health System Fails with Lethal Results). During one of my hospitalizations, a patient refused to go to his room, so staff called security, one of whom pulled out a can of pepper spray and yelled "You want some of this?"

Human Rights Watch did a report in 2015 on use of force against people with mental illness in prison, concluding:

Although no national data are available, Human Rights Watch’s research indicates that unwarranted, excessive, and punitive force against prisoners with mental health problems is widespread and may be increasing in the more than 5,100 jails and prisons in the United States. Experts blame deficient mental health treatment, inadequate use-of-force policies, insufficient staff training, and poor leadership.

Corrections officers are trained to deal with criminals. When they get someone who is sick, they don't know how to respond because they can't tell symptoms (such as urinating on the floor) from defiance. So force is often used when it isn't necessary. Better training for the officers and better treatment for the incarcerated with mental illness is needed (Should Incarceration Include Mental Health Treatment?).

The Reality of Force Used Against Mental Illness Sufferers

Force against someone with a mental illness should always be a last resort. In other words, the least restrictive means standard in psychiatric facilities should exist for people with mental illness in prison. Sadly, force often the first tactic used. Police rarely make sure people can understand and comply with their orders--it's not as easy as "comply and you won't die" when mental illness is involved. I saw one video in which an officer responded to a suicidal autistic man he knew was holding a toy truck (because the man's therapist told him) pull out his gun, shoot, miss, and hit the man's therapist.

Police are trained to respond to violence with violence. They are trained to respond to non-compliance of any kind with violence. They are not always trained to deescalate, although they should be. I know of one officer who received mental health training and his use of force in dealing with people with mental illness decreased after the training. But not all officers have this training, and not all officers are willing to change their tactics.

I have seen psychiatric staff act in a sadistic manner, using restraints and seclusion as a form of punishment or for the convenience of the staff (Operation No Restraint: How I Fought Back Against an Improper Restraint). These are trained professionals. If people used to dealing with sick people use force, how can we expect any differently from law enforcement?

How Use of Force Impacts Recovery from Mental Illness

Corrections officials at times needlessly and punitively deluge them with chemical sprays; shock them with electric stun devices; strap them to chairs and beds for days on end; break their jaws, noses, ribs; or leave them with lacerations, second degree burns, deep bruises, and damaged internal organs. The violence can traumatize already vulnerable men and women, aggravating their symptoms and making future mental health treatment more difficult. In some cases, including several documented in this report, the use of force has caused or contributed to prisoners’ deaths.

Most inmates are going to be released back into society. It is in our best interests, then, to help them become functioning members (A Broken System: Mental Illness and Correctional Facilities). Recovery is real and possible, even after incarceration. But use of force makes it more difficult. We owe it to ourselves to divert more people with mental illness in the criminal justice system to treatment, to end solitary confinement for people with mental illness unless they're a danger to others, and to train law enforcement to recognize and intervene in cases with mental illness. Most of these people will return to society--it's up to us whether they return with the possibility of recovery.

APA Reference
Oberg, B. (2016, August 1). Should Force Be Used Against Someone with Mental Illness?, HealthyPlace. Retrieved on 2022, August 10 from https://www.healthyplace.com/blogs/recoveringfrommentalillness/2016/08/should-force-be-used-against-someone-with-mental-illness

Staying Hydrated Is Important to Mental Health
Recovery From Borderline Personality Disorder Is Possible
Dr Musli Ferati
August, 9 2016 at 11:35 am

The usage of force through treatment and management of patients with mental disorders exhibits great and intrigued issue both; in psychiatric care system and public opinion. Indeed, constrain hospitalization is common way for psychotic patient with negative and defiant behavior, whose are dangerous for themselves and others. But excessively and extravagantly use of force against violent psychiatric patient indicates antipsychiatric and primitive manner of incarceration of people with mental disorders. The use of force should be the last one means for this category of mental ill patient. Furthermore, when it is known that psychiatrist have in disposition the large specter of psychotropic remedies that can pacify them for a short time. There are many psychiatric protocols for calming hostile and violent psychiatric patients through up to date psychiatric medications. Only after usage of chemical tranquilization, come up in foresight the use of moderate and properly force, in order to apply appropriate psychiatric therapy. Humane and empathic approach toward psychiatric patients with violent and hostile conduction is the best way to prevent any injuries with fatal outcomes, both for oneself psychiatric patient and for others.

Many years ago, I was in a county hospital in California for a 48 hour hold. I was extremely suicidal, and for my protection, I was strapped to a bed, spread eagled. This was triggering because it was like the original trauma I was trying to escape by ending my life. I screamed and cried, begging them for any other form of restraint. I kept sobbing, "You don't know what this is doing to me!" Finally, a CNA came in to help me to the bathroom. When she strapped me down again she left one of the foot cuffs loose enough that I could slip my foot in and out of it. That little bit of secret freedom and mercy on her part created so much peace of mind for me. When I look at the mostly functional life I have now, I know that her tiny gesture meant the difference between madness and sanity.

What do you suggest doing if and when excessive force is used by police for being non-compliant and further being arrested for refusing and charged with disrupting a govenment function or investigation> Your advice is desparately needed fora current incident thank you.

Sorry it's taken me so long to respond. I personally would take it up the chain of command and get the person's therapist involved.