Therapy Works If You Put In the Effort

Therapy works if you put in the effort. Recently I learned that my brother, an active alcoholic, agreed to go to counseling. I hope and pray that it helps. But he has issues with therapists and the last time he went to counseling he held it all in, so nothing changed. That's not helpful at all and is a waste of time. It's like the joke about how many therapists it takes to change a light bulb: "Only one, but the bulb has to really want to change." Therapy works if you put in the effort--but if you don't, the best therapist in the world won't be able to help.

Trust Is Crucial When Putting Effort into Therapy

My childhood was spent being dragged from therapist to therapist, being told, "Fix her!"

The therapists tried their best, but I have trust issues. Trust is crucial--without trusting the therapist, nothing will change. But trusting a therapist is easier said than done.

My brother does not trust therapists because the last few therapists he saw broke confidentiality in non-emergency situations. They would tell our parents what was discussed. Sometimes they would derogatorily refer to my brother as a "pothead," and one even said my brother had stolen some money from my parents when he didn't. I can't really blame my brother for not trusting therapists--I wouldn't either if I'd had some of his therapists. 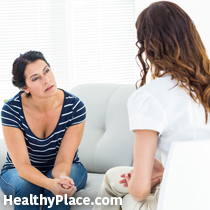 Trust is crucial when putting effort into therapy, to the point where I would strongly encourage you to find a different therapist if the one you have is not trustworthy. I don't mean that you should find a new therapist if you simply can't open up yet--I mean if they call you names or break confidentiality in a non-emergency situation then it's time to find a new therapist. A psychiatrist once told my mother that I had a victim mentality and that she was going to increase my medication--without talking to me. I fired her and probably could have had actions taken on her license, but she was a single mother with a disabled child and I didn't have the heart to do that.

Trust is crucial. Hang on tight when you find a therapist you can trust.

Part of the Effort Needed in Therapy Is Opening Up

I'll be honest--it took years before I could open up. I think I was in college before I started talking about some of the trauma I've experienced. It hurt like fire, but it helped. And I found that once I opened up, it got easier--even with a new therapist. Opening up hurts, yet helps. Therapy is the hardest work you'll ever do which is why therapy requires such effort, yet it's worth it.

How does one open up? I didn't grow up in a family with good communication skills--we'd leave articles out for the person to read. You go with what you know. I would write stories in which a main character went through the same thing I went through, then show it to my therapist. It worked, and as I opened up in this rather unorthodox way, I began to heal. As we said in the Army, "If it's stupid but it works, it isn't stupid."

A way to open up exists for you. You just have to find it. Try bringing news articles in and discussing them. Write about them in a novel or short story. Act it out. There's no such thing as a dumb way to open up.

Opening up hurts, yet helps. If it didn't hurt, we wouldn't need the therapy. Yes, it hurts. But the way to treat a wound is to clean it first, which stings, then bandage it and let it heal.

When You Put the Effort into Therapy, It Gets Easier

I started getting counseling on my terms in college, with strong encouragement from the university to stay in therapy. I'd spent years hiding everything, just like my brother does. But the illness had knocked me around enough to where I wanted to get better--who wants to be depressed and suicidal all the time? Who wants to struggle from alcoholism and self-injury? I had to want to heal more than I wanted to avoid pain. I had to make a choice to heal, and I've noticed that it gets easier.

After college, I was written off as a hopeless case. I was told I'd drift in and out of institutions my adult life until they were tired of treating me. And for the first few years, that was true. But schema therapy changed that. I learned how to argue with my illness. I learned how to fight back. I learned how to cope.

It gets easier. I found that as I opened up, it became easier to talk about my traumas. That doesn't mean some of it is easy, not by a long shot. But I've found that it takes less time for me to trust a therapist and that I can talk about some of it without resorting to negative coping skills. I'm sober and usually safe. And the funny thing about being sober, safe, and sane is that the more you do it, the easier it becomes.

Therapy works, if you put in the effort.

APA Reference
Oberg, B. (2016, October 10). Therapy Works If You Put In the Effort, HealthyPlace. Retrieved on 2020, July 9 from https://www.healthyplace.com/blogs/recoveringfrommentalillness/2016/10/therapy-works-if-you-put-in-effort