Alcoholism Symptoms Should Not Vary By Culture

I recently returned from a trip to Quebec, where I learned alcoholism symptoms should not vary by culture. Sadly, they do. In the United States, having a drink in the morning is called an eye-opener and is one of the CAGE Test symptoms of alcoholism. Even WebMD lists it as a sign of a drinking problem. In Quebec, a brunch cocktail such as a mimosa or a bloody Caesar is normal. I even posted to my Facebook page that I had no clue how Canadians diagnose alcoholism because it seemed like everyone drank like fish. Interestingly enough, the alcoholism rate is higher in the U.S. than it is in Canada--but is that because of culture? There needs to be a clearly defined international standard for alcoholism symptoms--not one that seems to vary according to where you are.

Do You Have Alcoholism Symptoms?

Regardless of culture, I think these two questions are at the heart of deciding if you have an alcohol abuse problem (Identifying and Diagnosing Alcoholism).

What Is Your Attitude Toward Alcohol?

Maybe the time you drink is irrelevant. What is relevant, however, is your attitude towards that drink. If you have to have it, you have a problem. 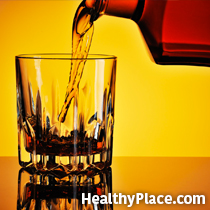 In my active addiction, I never did eye-openers. This enabled me to remain in denial for years. My attitude toward alcohol, however, should have been a dead giveaway. Some days I could hardly wait until noon so I could start drinking. Some days I drank two drinks, some days 10--but I had to have those drinks. Even if I didn't get drunk, I had to have those drinks. That, more than when you drink, is a warning sign.

Your attitude toward alcohol, more than your culture, is what can determine alcoholism. If you have to have that drink, you may have a problem with alcohol. A strong need, craving, or compulsion to drink should always be a warning sign.

What Is Your Motive for Drinking?

Another warning sign is if you're drinking to self-medicate. If you've ever said, "This is why I drink," you may have a problem.

I drank to forget. I drank to blot out the fact I was miserable. I drank because I liked being drunk. Then I realized I couldn't stop. I had to forget. I had to blot out reality. Now, in addition to my psychiatric diagnosis, I had an alcohol use disorder. A couple of drinks can hurt--they can play havoc with one's psychiatric symptoms and stop the medication from working. The realization that I had a bad motive for drinking gave me the insight I needed to ask for help--and led me to getting sober.

Your motive for drinking is just as important as your drinking patterns in determining whether or not you have an alcohol use disorder.

If You Have Alcoholism Symptoms, Don't Lose Hope

In some countries, the line between drinking problem and alcoholism is a good deal more blurry than it is in the U.S. Alcohol use disorders are a spectrum in some countries, and just because you have a difference on the spectrum does not mean you're an alcoholic or will become an alcoholic (take an Alcoholism Test). This is not the case in the U.S., but maybe it should be. Cultural variations in alcohol use are normal. What is not normal is drinking in spite of negative consequences such as physical symptoms of dependence or legal trouble.

The good news is there is hope if you have alcoholism symptoms. Treatment exists. I went through a short stint in rehab and will celebrate four years sober on March 25th. While total abstinence may not work for everybody, it worked for me. I take a medication for the cravings that has helped tremendously, I've stayed on my psychiatric medication and in therapy, and I go to Alcoholics Anonymous meetings. If I can get sober, so can you.

Alcoholism symptoms should not vary by culture. Treatment should be based on an international standard based on science. We owe it to ourselves to have cutting-edge treatment that doesn't vary by location.

APA Reference
Oberg, B. (2017, March 13). Alcoholism Symptoms Should Not Vary By Culture, HealthyPlace. Retrieved on 2020, September 23 from https://www.healthyplace.com/blogs/recoveringfrommentalillness/2017/03/alcoholism-symptoms-should-not-vary-by-culture

Caring for Your Mental Health While Traveling
Childhood Mental Disorders Are Not Always the Parents' Fault
stickman
June, 7 2017 at 11:47 pm

Alcohol has a huge impact on health. So use a moderation, not overuse.

Very well written, and not easily done with a topic like this. I love how this is broken down. #run 2 I hope we see more of this mindful discussion occurring.