See? I Told You My Eating Disorder Isn't A Big Deal

In a lot of ways, the eating disorders section of the Diagnostic and Statistical Manual of Mental Disorders improved drastically in the 2013 edition (the DSM-5). Binge eating was given its own diagnosis, finally allowing millions of Americans to hear the "me too" of not being alone in their struggle. People were finally able to see that they were sick (and stop shaming themselves), which is a huge step in the road to healing. Unfortunately, I can't consider all of the changes in this most recent edit as progress.

The diagnostic criteria for Anorexia and Bulimia "relaxed," allowing for people to be properly diagnosed who would have been previously diagnosed as the nebulous Eating Disorder Not Otherwise Specified (ED-NOS). This can make a big difference in how much treatment an insurance company will provide. But by relaxing the criteria, apparently the American Psychiatric Association felt the need to add a severity indicator to the diagnosis.

Language is a tricky thing. When you are dealing with an eating disorder, words can become twisted and misinterpreted in a split second. You might diagnose me as ED-NOS because my weight, though drastically lower than it was nine months ago, falls within a normal range. What I hear is "I'm still too fat." You tell me that I'm not yet thin enough to go into the hospital, but I hear a challenge. 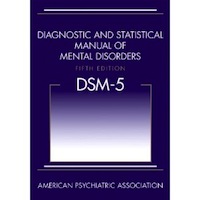 It's hard enough to believe that you are "sick enough" to need help, but now your physician can confirm how very little you need to worry about your eating disorder.

A Message for Eating Disorder Sufferers

Your eating disorder is "mild" so it's not a big deal - not as big a deal as if it were "severe" or "extreme" - right? Wrong. Very, very wrong. You are very sick long before you reach what the DSM-5 might categorize as "severe." In fact, most people are dead long before they fall into the "severe" category. A lot of people are sick or dead before they even meet the full diagnostic criteria for anorexia or bulimia. I certainly was.

No matter what your diagnosis is (or isn't), if you have an eating disorder, you are SICK. Your labs might be perfect. Your weight might be "normal." Heck, you might be flying under the radar entirely and nobody knows you have an eating disorder. I did for a long time. But that doesn't mean I wasn't sick. It's always okay - until it isn't. Do NOT let a few words on a medical document determine whether or not you try to recover. You are "sick enough" and you are absolutely worth recovery.

A Message for Health Care Providers

Doctors, therapists, psychiatrists - your patient could be in the Intensive Care Unit (ICU) at the hospital and he or she will still not think themselves sick. While I think it is absolutely ludicrous that we now "rate" the severity of an eating disorder, I understand if you need to do so for insurance purposes or whatever. As a future counselor, I realize you may have to add that so that your patient can get any sort of treatment coverage at all.

But for the love of all things holy, do NOT put that on any paperwork your client sees. He or she is being battered enough by the eating disordered voice in their head, and he or she certainly doesn't need fuel to add to the fire. Regardless of how "mild" an eating disorder might be according to the DSM-5, you need to remind your client that he or she is very sick. This is not something to take lightly as a clinician - this is life or death and your client needs to know that.

So don't tell them how "mild" or "severe" their eating disorder is - even if they ask. As a health care provider, it is your job to make your patient recognize just how deadly serious an eating disorder is, regardless of diagnosis, lab work, or body mass index (BMI).

The last thing we need is more people trying to prove just how "sick" they are in a competition to the death.

What The Mirror Shows Me in Eating Disorder Recovery
3 Tips to Be Comfortable Around Food in ED Recovery
Jennn
June, 20 2014 at 2:22 pm

Totally agree with your post!
I was in a day patient service, I had a hard time agreeing to put on any weight because despite meeting the category for anorexia, I still felt fat.
I had and still have huge problems with my weight but my main concern is the bulimia. I wish I could stop, I don't seem to be able to. I have lost weight again and still feel fat, I think I use the bulimia because I cannot stand the weight gain or tolerate food or feeling full.
I got back a print out of my diagnosis. It reads that I have bulimia nervosa. Nothing about anorexia (despite having had to gain quite a lot of weight whilst I was there) and now all the work on trying to get my head around having to gain weight feels that bit further, I find myself convincing myself (if I am not already convinced) that I do not need to gain weight, that anorexia is not my problem and never was and that battling with the ideal that if I could just stop eating I wouldn't have the bulimia and would be recovered and this is what I want. I struggle to see at many times that I need to or should eat.
Why didn't they write a diagnosis of anorexia on my diagnosis forms? Possibly because I was not at deaths door compared to some others who had been placed in the day patients programme despite actually them being too underweight for the programme (they had no funding for inpatients so had been sent to day patients treatment).
It does worry me that even the specialists can't see this insensitivity and the problems it can cause to people on the cusp of relapse and in a vulnerable position. If they can't realise this what hope have we got with the rest of the medical profession who aren't specialised?!

Jennn,
I recently had this same conversation with a friend - how a diagnosis can become a total mind game with the ED and make you feel like you don't have an ED at all. Part of the problem is that as ED sufferers, we sort of "rank" EDs from best to worst (anorexia, then bulimia, then ed-nos, then bed, etc.) - unfortunately, society seems to do a fair bit of this as well. The only thing we can really do is continue to educate those around us (medical professionals included!!) about how serious EDs are in any form.
Hope you can get back on track with your recovery - it's really worth it, I promise!
xoxo
j

Hi Jess -
I know I struggle with an ED, but I have never seen a professional about it. It used to be Anorexia, and through recovering from that I have somehow picked up bingeing and purging habits, which I know are not good. I wonder what type of doctor you recommend I see, or what course of action you recommend I take? I try to be disciplined and stop myself but it is very hard and would like to seek help. Thanks -

Gw/anED -
I would suggest starting by finding a therapist and dietitian who have experience in treating eating disorders. They will be the best people to get you started toward recovery and can guide you to the other things (e.g., doctor, internist, psychiatrist) you may need to help you on your journey!
You're right - recovery is hard, but you're asking for help - and there are plenty of folks willing to help you!
j

Great thoughts! It is easy as a therapist (and someone less familiar with the ED mindset) to forget how competitive and comparative the ED mind can be. Thanks for sharing!

Spot on my friend. My primary care and nutritionist both saw the severity. They diagnosed anorexia but the hospital diagnosed EDNOS because they ranked my symptoms not my behaviors and patterns. I instantly thought that meant I wasn't really sick and tried to convince my doctor of that as well. Now, I'm so grateful that my doctor knew better and wasn't swayed by my insistence that I wasn't really sick.

Hi Jessica,
Great post. I think severity has actually always been there but not used. I believe it still may be optional, but I could be wrong.
Regardless, great piece and great point.
- Natasha Tracy

Spot on. Yes. For me (and sounds like many others) it turns into "Fine then. I'll get sicker. I'll show you on the outside just how messed up I feel on the inside." That becomes really dangerous for many individuals, myself included. Thanks for highlighting this change to the DSM and bringing such an important topic to light!

People already compete with both themselves (indeed a possible and horrible truth; a mind-game) and others and it is sick. Sick-to-my-stomach sick and the kind of sick that reminds yourself and others that you do indeed suffer from a mental illness. I hate to see the horrible things women and men do to themselves in order to reach the 'severe' status - or even prove to those ignorant on the subject that they DO in fact have an eating disorder and are not doing so hot. EDs are a MENTAL and psychological disorder - so why does our weight define us as severe or mild or pretentious? Here's the thing: it doesn't.
Keep fighting, everybody. You are loved. Thanks for sharing, Jess.

Thank you, Jess. I had many reservations about the clinical markers in the last DSM, and was happy to see changes in the weight requirements in the new one. However, I share your thoughts on the implications of rating the 'severity' of someone's ED. In many ways, it's no different than the previous requirement of a certain BMI. It's still indicated one is not 'sick enough' for treatment.