Q and A with Bipolar Author, Juliann Garey

This two-part series will explore the inner world of author and mental health advocate, Juliann Garey. Through a series of questions and answers, Garey will shed light on the plight of those with mental health challenges in terms of stigma, medications, mania, depression, mixed states and the creative process. 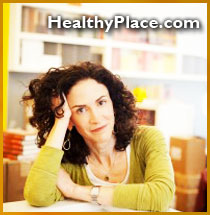 "Juliann Garey takes us inside the restless mind, ravaged heart, and anguished soul of Greyson Todd, a successful Hollywood studio executive who leaves his wife and young daughter and for a decade travels the world giving free rein to the bipolar disorder he's been forced to keep hidden for almost 20 years. The novel intricately weaves together three timelines: the story of Greyson's travels (Rome, Israel, Santiago, Thailand, Uganda); the progressive unravelling of his own father seen through Greyson's eyes as a child; and the intimacies and estrangements of his marriage. The entire narrative unfolds in the time it takes him to undergo twelve 30-second electroshock treatments in a New York psychiatric ward."

1- Your book, Too Bright to Hear Too Loud to See, is based on a character named Greyson Todd. Would you be friends with Mr. Todd in real life?

That is such a great question—and I guess the answer depends on where in Too Bright To Hear Too Loud To See, I would be meeting Greyson. Because he changes so much over the course of the book. And because, like so many people with bipolar disorder—or at least those like me, he can change so much from one day to the next. When he’s manic can be gregarious, charming, outgoing, very seductive. And then when that energy crosses the line and turns into a mixed episode—something with which I unfortunately have a lot of first hand experience—he becomes agitated, restless, paranoid, anxious, and desperate. Not someone you want to be around. And certainly not someone you want to be.

I think if I were to meet Greyson when he was at the top of his game as an agent or studio executive, I would be drawn to him, to his tremendous charisma, but I’d also be intimidated by his power and ambition so I don’t know if we’d be friends. I grew up in LA and I’ve known a lot of men like Greyson—some bipolar, some not. Hollywood breeds men like him and it excuses, enables and even rewards bipolar behavior.

If on the other hand, Greyson and I met on a psych ward that would be very different. I think then we’d become fast friends. There’s something equalizing about a psychiatric ward. Greyson and I share the same dark sense of humor. And I think we both travel through life with the weight of loss—his about the daughter he abandoned, mine about the father I lost to suicide when I was a teenager.

The psych ward scenes in Too Bright To Hear Too Loud To See are some of my favorites and a lot of the details and observations are based on my own hospitalization in 2009. So I guess, the short answer is yes, I feel a tremendous amount of compassion for Greyson, despite the bad things he does and the ways in which he hurts people. Some people read the book and think Greyson is a bad guy, an asshole. I never thought that about him. I always felt that his behavior was a symptom of the illness and that he was a guy in tremendous pain. From page one. So I guess you could say I feel his pain. I think he and I understand each other.

2- You have struggled with bipolar disorder yourself and much of the book is based on experiences that were of a personal nature. Can you bring us through the decision to write a novel over a memoir?

Well, there are a number of reasons. For one thing, I love inventing stories, having the freedom to go anywhere with a character as long as I am being faithful to that character’s truth. In this case that meant being true and accurate in the portrayal of Greyson’s bipolar experience. But the other thing is that in order to write a memoir, I think, you need to have a certain distance on the story you’re telling, on that part of your life. As the writer, you need to know what the story is. Without that perspective, you’re lost. And the truth is that during the seven years it took me to write Too Bright To Hear Too Loud To See I was going through a seven-year period of extreme instability in terms of my own illness. I had no perspective. In fact, the extreme mixed episodes, the rapid cycling, even the psychotic episodes I had during the time I was writing the book are splattered all over the pages. It’s a messy book. It is in a sense a chronicle of that period of extreme upheaval—a time during which I tried dozens of treatments, experienced countless side effects and filtered it all through Greyson.

3- How do you think the stigma of mental illness has changed from twenty years ago to today?

That’s a difficult and complicated question. I like complicated questions. I mean I’d love to be able to just say, ‘Oh, well it’s so much better than it used to be.’ But I think that stigma depends entirely on context. Who are you? What kind of work do you do? Where do you live?

I’m a writer who lives in New York City so for me, there is certainly less stigma today than there was twenty years ago. The people I’m surrounded by are generally aware and pretty sophisticated and frankly pretty liberal. Then again, just a few years ago, I was talking with a very well educated, well-traveled man—a man who you’d think would know better—and the subject of my bipolar disorder came up. And he said, “So what…that means you have like multiple personalities?’ So I think it comes down to education.

I think that Greyson—if he wanted to keep his job running a studio would still, today be forced to hide his bipolar disorder. No matter how well-medicated, I don’t think that today, someone with a bipolar diagnosis would be allowed to run a movie studio—even though the treatments available are better than they were twenty years ago. And that’s pretty terrible because there are some people who can take one drug and function at a tremendously high level and those people can often be some of the most creative and brilliant minds working on any given day. For those people, their diagnosis shouldn’t create a “bipolar ceiling” in terms of how far they can advance in their careers. But I believe it does.

And if you live someplace where there’s less education about mental illness and possibly more fear-mongering—where for example you’re told that it’s the mentally ill as a group who pose a threat, who are going to come into your local schools armed with assault rifles and commit mass murder (which is what the NRA would like people to believe but which is patently and statistically untrue)—then sadly, I think, stigma may even be on the rise.

4- How are the issues of gun control and mental health interconnected in the United States today? What could we do to curb gun violence in the US?

After a tragedy like the massacre at Newtown, it’s only natural that people want to find a cause, a place to lay blame and a way to take action quickly. Much of the legislation that was proposed in the US targeted the mentally ill. But laws that force therapists to breach patient confidentiality and that expand background checks by invading the privacy of mentally ill individuals will not keep us safer as a country. Those laws won’t keep our children safer at school. Gun laws aimed at the mentally ill are a smoke screen designed to pacify and quiet public outcry and deflect attention from the real public health crisis presented by gun violence. Because the truth is that just 3-5% of violent crime in this country is committed by people with a mental illness. The overwhelming majority of people with a serious mental illness never commit an act of violence in their entire lives (they are in fact twelve times more likely to be the victim of a violent crime).

What if instead of blaming the mentally ill, we were to look at the epidemic of gun violence as the public health problem it is and approach it as we do other public health problems? Target the most important and/or most easily affected populations with the least intrusive, most effective solutions. Professor Jeffrey Swanson of Duke University said, “With hindsight mass shooters are often described as obviously disturbed. But you can't go around locking up all the socially awkward young men." And he’s right. You can’t. But you reduce the chance they get their hands on a gun.

Because what the perpetrators of Sandyhook, Columbine, Virginia Tech, Aurora, and Oregon have in common besides mental illness is that they were all young men. That is the population we need to be dealing with. A 2012 study by The Johns Hopkins Bloomberg School of Health found that the homicide rate for 20 year-olds is four times that of 40 year-olds. If we want to curb gun violence, we need to raise the legal age for gun ownership from 18 to 21. For the same reason raising the drinking age to 21 was a more effective way to reduce drunk driving deaths than administering more frequent driving tests, or Breathalyzer tests in bars. It targeted the group at highest risk and took a measured approach.

If we raised the age at which it was legal to own a gun to 21, clearly it wouldn’t eliminate all gun-related violence. Raising the legal drinking age from 18 to 21 didn’t eliminate all car accidents, but 79 studies show it resulted in a significant decrease in alcohol-related car crashes. And didn’t we decide there was good reason to make it illegal to sell or even advertise cigarettes to minors? And what could be easier than verifying age? We don’t even need a new federal bureaucracy—or a “nut list” to do that, just a simple driver’s license check.

5- What is the biggest misunderstanding the public has about mental illness?

Now? Now I think the biggest misunderstanding—and it’s being perpetuated by the media, by gun control advocates and even by President Obama, as well-intentioned as I believe he is—is that the mentally ill are dangerous. It’s sad and it’s infuriating. And we are, as a group, such an easy target—so to speak. There are no lobbyists running to our defense or legislating to protect our constitutional rights when we are scapegoated. People are very comfortable lumping “the mentally ill” with violent criminals in the name of protecting the public. It happens all the time.

Check out Too Bright to Hear To Loud to See at the following links.

APA Reference
Curry, C. (2013, May 7). Q and A with Bipolar Author, Juliann Garey, HealthyPlace. Retrieved on 2022, August 16 from https://www.healthyplace.com/blogs/survivingmentalhealthstigma/2013/05/q-and-a-with-juliann-garey