Q and A with Bipolar Author Juliann Garey (part 2)

This two-part series will explore the inner world of author and mental health advocate,Juliann Garey. Through a series of questions and answers, Garey will shed light on the plight of those with mental health challenges in terms of stigma, medications, mania, depression, mixed states and the creative process.

6- If you had the choice, would you still have bipolar disorder?

You know it’s interesting—I’ve read or heard so many interviews in which people talk about all the positive effects having bipolar disorder has had on their lives and I don’t doubt that that can be true. But I’ve heard that positive take so often that it almost seems as if to say anything else would be a betrayal of the bipolar community in some fundamental way. I believe that people can have very different experiences of the illness and whether you’d choose to have it depends entirely on that experience. I’ve struggled with treatment-resistant ultra, ultra rapid cycling bipolar with almost no euphoric mania for over twenty years—misdiagnosed as unipolar depression for ten before that. There has been very little upside and a whole lot of pain for a very long time. It’s been hard on my marriage, tough for my children and financially devastating. So, no, I would not choose this disease if I had the choice to make. But since I don’t have that choice, I am choosing to use what I’ve learned, to do what I can to increase awareness, decrease stigma and advocate for others. And there is a lot of work to be done so hopefully I will be able to be effective in a meaningful way. And then that will be the upside of living with this. 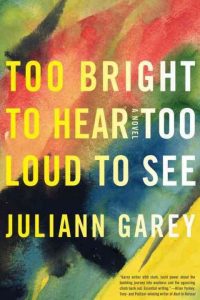 7- Can you explain your personal view on the link between creativity and mental illness?

Hmm. Well there is a link that people like Kay Jamison (in her book Touched by Fire) and others have established and really, all you have to do is look at the number of poets and writers who were also inpatients at places like McLean Hospital to see that it’s pretty indisputable. So I certainly believe the link is there. How it functions at the level of the neuron, that I can’t tell you. I think brain imaging is bringing us closer to being able to discover those connections.

I can speak to my own experience of it. I was very ill when I wrote Too Bright To Hear Too Loud To See and that illness, those periods of florid mania and desperate depression gave me access to not only emotions but also linguistic and sensory associations I would not otherwise have had. My ability to describe what I was feeling, to make metaphors, was heightened by the severity of my bipolar disorder at the time. So for me, there was a very concrete and very painful connection between my mental illness and my creative abilities.

8- You decided to go off your meds to write your book. In hindsight, do you stand by your decision? Would you recommend other bipolar authors do the same?

I’m glad you asked this because that’s a misconception that I’d like to correct. After I wrote Too Bright To Hear Too Loud To See, I wrote an article for Salon.com which was really about being over-medicated. It was about feeling “too well” to the point of being numbed-out. I’d been asked by my publisher to think about writing a memoir about the medical journey of those seven years when my bipolar disorder was really catalyzed by fluctuating hormones and as a result I kind of fell between the cracks that exist between women’s health and psychiatry. Nobody knew what to do with me.

But between being so numb and disconnected and dealing with all the cognitive side effects from the many drugs I was (and still am) on, I really couldn’t write much of anything. But I was stable. I’d stopped the horrible, endless rapid cycling that had been going on for seven years; none of my doctors wanted to rock the boat.

So that article was about deciding that it was time to rock the boat. I decided that stability was not enough—that I wanted to feel more, to be more connected to the world and to people and hopefully to feel creative again. I’m really lucky that I have a doctor who understands and respects how important those things are. So very slowly and with my doctor I started to change and reduce my medication—knowing that it would not be an easy fix and there would probably be some bad days because I was going to be stirring the pot. But I never went “off” my meds. And I certainly didn’t go off anything to write Too Bright To Hear Too Loud To See. If anything, I probably tried more new drugs and drug combinations during those seven years than during the rest of my illness put together. And I ended up with a psychiatrist and reproductive endocrinologist who worked tirelessly together to come up with a totally off-the-grid treatment for me because so little was known, so little research has been done about the role hormones play and the effect they have on bipolar disorder and other mental illnesses.

9- Have you ever been stigmatized in your personal or professional life for having bipolar disorder?

Yes, absolutely. I have probably encountered more stigma among medical doctors and other healthcare workers than anyplace else. For most of my adult life—until I wrote Too Bright To Hear Too Loud To See and started talking and writing about my bipolar disorder—most people I met couldn’t tell I had a mental illness. On days when I couldn’t function I simply didn’t go out. The rest of the time I passed for “normal.” Except when I had to go to a doctor. You can opt to leave a line item like your mental status off a job application or gym membership but not off your medical history. Especially when, like me, you have to attach multiple pages because there’s never enough space under “list any current medications.” There’s frequently some reaction to the list of drugs. In the past, I’ve been denied painkillers for an ear infection that eventually caused my eardrum to rupture and for a migraine that lasted three weeks. And not because there wasn’t a safe painkiller available to give me.

Also, I never know when I’m going to encounter a doctor who is going to decide that whatever I’ve come in for—acid reflux, torn hamstring, sinus infection—is really in fact related to my bipolar disorder. That I’m just making stuff up. Because I like going to the doctor that much. I never knew it until I started poking around, but that particular kind of discriminatory doctoring has a name. It’s called “diagnostic overshadowing.”

It’s kind of outrageous that “first do no harm” does not include the mentally ill. I’m certainly not saying all medical doctors are like that. I’ve encountered some astoundingly compassionate doctors who have gone above and beyond to educate themselves in order to help me and I’m tremendously indebted to them. I guess I just feel they should be the rule, not the exception. Maybe that’s asking a lot.

10-How would you describe mania to someone who has never experienced it?

Not only do I think mania is different for different people, but it’s been different for me at different times in my life. Too Bright To Hear Too Loud To See is actually a line from the book and that acid-trippy exaggerated sense of color and sound is what happened to me at the beginning of a manic episode during the time I was writing the book. Things would get so loud and so bright that I would confuse one sense for the other. I could literally hear clouds of bus exhaust. I couldn’t go on the subway or into a store because I could hear everyone talking all at once and all the music playing on everyone’s iPods. It was a subtle form of psychosis.

At other times, during mixed states, which are a horrible combination of mania superimposed on depression, I’ve felt like I want to rip my own skin off. There’s a horrible agitation and restlessness to it—like your flesh is going to fly off your bones. And thinking clearly becomes impossible. Even the simplest two-step task—because you think all you have to do is get from A to B. But when a thousand thoughts come hurtling through the space between A and B the ground beneath you just sort of gives way. Sometimes it can feel like you’re just hanging by your fingernails. It’s scary as hell. 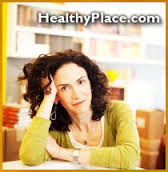 11- What is taking up your days lately? Any projects in the works?

Well right now I’m undergoing this pretty significant medication change, which is sort of a short-term full time job. My doctor and I are starting to figure out how to balance things but the first couple of weeks were pretty challenging. I definitely feel less numb and things have improved cognitively so I’ve been doing a lot of reading and gearing up to write. I’m working on a collection of non-fiction essays which I hope will turn into some kind of memior-ish thing and I’ve started playing with two different ideas for another novel. I’ll just have to keep writing and see where it takes me. I think the one that feels the most immediate and true will be the one that sticks.

Check out Too Bright to Hear To Loud to See at the following links.

APA Reference
Curry, C. (2013, May 14). Q and A with Bipolar Author Juliann Garey (part 2), HealthyPlace. Retrieved on 2022, August 16 from https://www.healthyplace.com/blogs/survivingmentalhealthstigma/2013/05/q-and-a-with-bipolar-author-juliann-garey-part-2

Q and A with Bipolar Author, Juliann Garey
Hyperactive and Stigmatized: The Effects of ADHD
Madeleine Mariani
November, 18 2014 at 5:07 pm

she should read the vitamin cure on the internet and check out truehope.com