The Links Between Anxiety, Anger and Depression

Anger can be the match that sparks a dip in your mood or a bout with anxiety, and according to what I've been reading recently this is because the part of your brain that normally keeps a lid on angry feelings is impaired when you're depressed.

In Harvard studies, scientists have found that angry feelings in a control group of non-depressed, 'normal' people are usually cooled by activity in the frontal cortex. This is part of the brain responsible for thinking/reasoning. However, in some severely depressed people, a lack of both recognition and control of anger can lead to episodes of rage, sometimes violent. Another group of those with major depression, who are free of anger attacks, show a lack of activity in both brain areas; both their feelings and reasoning about anger are deadened.

The results of these studies estimate that about 1/3 of those with severe depression in the United States also suffer bouts of anger. Depression follows on from episodes in which people feel irritable, and when the depression is properly treated the anger subsides. It's a chicken or the egg thing, though. They don't yet know which causes which, only that they seem to go hand in hand for a significant proportion of those with depression. Raises questions, plenty of them.

When anger's trying to tell you something about anxiety

Anger's a tricky emotion at the best of times, and it may just be fact that you're going to experience irritation, frustration or impatience when you're feeling down. I don't think anybody really needed a study to tell them that depression and frustration and/or panic often coincide. It may be a consequence of feeling like you have to struggle against every little thing just to get through the day. Many times it's also part of the package with PTSD. Rage is a factor -whether it looks like a great, fiery beast or not. Maybe irritability is even helping to mask underlying insecurities, or grief. 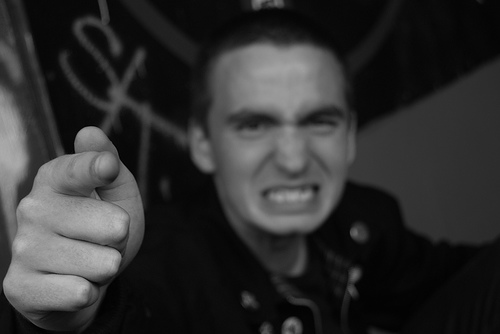 One of the best things I do for myself is allow some emotional space around all that. Accept being angry, where it's reasonable to do so, always give myself a way out no matter how 'right' I think I am (it's easy to get stuck there), and where I can, avoid blame.

They aren't easy questions to ask, or answer.

There's a great deal we don't know about how an anxious mind processes anger but I do know not dealing with it, denying it, increases the chances it'll wreak havoc with your life, maybe even stop you finding ways to treat anxiety.

When to Disclose an Anxiety Disorder
The New Science of Sleep: Nightmares and Anxiety
Mikayla
June, 5 2018 at 8:38 pm

I've been pretty level headed my whole life. Other then one previous episode of ”depression” (I was never diagnosed), when I cried everyday and felt worthless for 3 months every single day. Now though, I battle anxiety, I get so angry that I can't think and I throw things over small fights with my significant other. I also have really low days that can turn into a week.

I'm not sure what is happening to me, I do have depression and my meds normally work. Here lately everything bothers me... liquid pouring, ice chewing, people touching me. I said F*%k to my 11yr old son. I don't have a filter and I've hurt peoples feelings like my family. My anxiety is out of control and I just get angry. I think about shooting myself but them I think about my mom and my son and I feel selfish. I don't think I could do it anyways it just comes in my head. I don't like being like this but I'm supposed to be the strong mother, wife and daughter.

I constantly lash out at my family. I get in these guys of anger where all my feelings come out and I'm hard to bring myself back down. I am always thinking about my constant self hatred. And I start to believe everything and everyone hates me or doesnt care about me. I get so upset and frustrated I cry. Most day I dont leave the house because of some anxiety. And I feel that I have depression . I'm at a loss here. I sat that I should just kill myself. Becuase I can't stand my own self. I try very hard to get along with my family. And to have control over myself. But I dont know where to turn. Its been really tough... And I'm teying my best.

Sam, first and foremost, if you are ever thinking of harming yourself, please seek help. Here's a link with some resources: https://www.healthyplace.com/other-info/suicide/suicide-suicidal-thoughts-and-behaviors-t…. Second, I am truly sorry to hear you are experiencing such difficulty. It sounds like you are experiencing quite a lot of emotional pain. Please consider seeking out a therapist. I hear that you are trying your best, but we can all benefit from additional support. Sending peace your way.

My daughter (22) has been going thru these episodes of anger, depression, anxiety and suicidal thoughts once each year. We need to admit her to a Mental Hospital for treatment, each time they treat her they come up with a different diagnose like first time depression; second time bipolar depression and this time still waiting for them to give us a diagnosis. She goes to college and has a job, very smart and really does think about her future and worries about her health, doesn't understand why she feels the way she does. She is the most sweet girl but when she goes thru those episodes its just not my daughter.

Why do I constantly feel frustrated, angry, anxious and sad. I have a relatively normal good life. Idk why I'm feeling this way.