There are many things some men don't know about rape (Do Women Enjoy Being Raped? Myths About Rape). Presidential candidate Donald Trump recently accepted an endorsement from convicted rapist Mike Tyson, calling him a "tough guy" and saying he was "railroaded." This has not gone over well in Indiana, where Tyson was convicted and served three years in a youth prison before getting early release. It made me think of Mike Tyson, Donald Trump, and what men don't know about rape.

What Men Don't Know about Rape: The Victim Has the Right to Say 'No' at Any Time

I'm old enough to remember the trial, as well as the reactions from people. I also studied the trial during college--it was an example of how not to cover a rape trial. One thing that stands out is that during jury selection, the prosecutor said that the rape victim had the right to say "no" at any time. A male prospective juror said, "Well, if they're already doing it, then it's a little late, isn't it?"

The prosecutor used the opportunity to say that the victim has the right to say stop at any point before or during intercourse--and that the guy has to stop once she says stop. That man did not serve on the jury.

Trump blames Tyson's victim, Desiree Washington, for being in his hotel room. He's not the only one; I remember hearing a woman say, "She asked for it when she went to his hotel room." 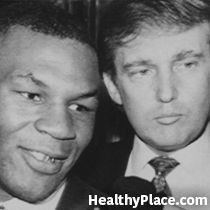 Tyson invited her to a party and told her he was going to take her sightseeing; she even brought a camera. Poor judgment does not give anyone the right to rape (Getting Raped: The Stigma of Being a Rape Victim). Rape victims do not "ask for it" by drinking, flirting, wearing the wrong clothes, or going somewhere with the rapist. The blame is firmly on the rapist.

The victim always has the right to say "no." Any sex after "no" is rape.

Rape is the only crime in the country where the victim is put on trial. I once heard a defense lawyer blame a molestation on a seven-year-old with, "She's not the perfect little girl."

Tyson's defense team appealed his conviction, partially because they were not allowed to ask Washington about her past sexual history. That should not matter, and, in Indiana, the defense lawyer can not ask about it unless it's relevant to the case. It should be inadmissible, period--even a husband has to have consent from his wife, and a john has to have consent from the hooker. Rape is nonconsensual sex, regardless of the victim's past or present relationship with the perpetrator. Contrary to what some politicians say, a wife can be raped by her husband, and a prostitute can be raped by a john.

It does not matter how many people you've been intimate with--your body is still your body. You have the right to decide what's done with it and to it. No one, be it a Republican Congressman, a former lover, or a current beau, has the right to make that decision for you. Your consent is a God-given gift and should be honored at all times and anyone who says otherwise is a misogynistic pig--no offense to swine intended.

What Men Don't Know about Rape: Victims Have Good Days and Bad Days

Trump also said that in the days following the rape Washington was dancing, smiling, and happy as could be. This should be cause for hope--that the trauma will not always dominate our lives, that we can get better, that we can overcome a violent violation (Neuroplasty: What You Need To Know About PTSD Recovery). Rape victims do not live in the shadow of rape forever. Like any other crime victim, we have good days and bad days.

I am a sexual assault survivor. My case never saw trial and I don't know what happened to my attacker after his arrest. I don't even know his full name. Like 15 out of 16 victims, I was left to pick up the pieces with no help from the State. I even had to battle to get the State to pay my medical bills for the rape exam. Back then I had a lot of bad days. But now, after time and years of therapy, I have fewer and fewer of them.

Thank you for that. When I got raped the case got kicked out of court. Because I had a natural body responds. In short I had an orgasim. Doctors say it's your body's natural response and I had no control over it. But I can't forgive myself for that. All I think is how could I have allowed it. You can eat or sleep and to afraid to go out of the house. I hope the ass holes that raped me are in he'll.