The Depression Roller Coaster Won't Let You Enjoy the Ride 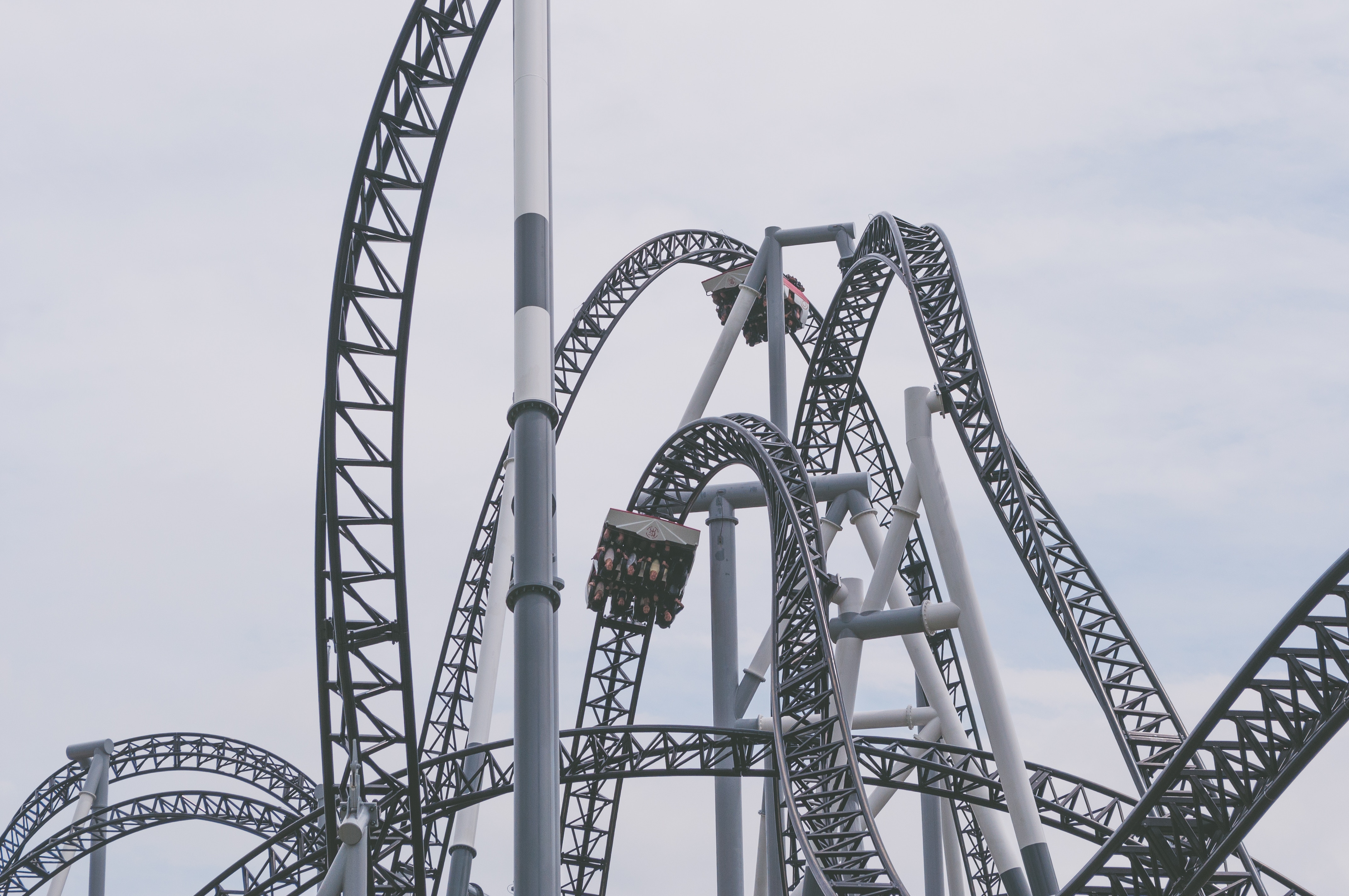 It’s surprising how quickly depression's ups and downs can get you. It’s almost as if, you’re going along feeling pretty good and then WHAM, depression slams into you and says, “Now, now… you have chronic depression, remember? You’re not allowed to feel too good.” That’s the depression roller coaster.

I’ve been feeling pretty good lately so imagine my surprise and confusion when after a light, afternoon nap, I woke up feeling acutely negative and sad and I could feel the depression on me like a mound of heavy dirt. Clinically, it’s not supposed to happen that way, I suppose. It's like a roller coaster sometimes. Up one hour, down the next. But I know the darkness of depression all too well so when I’m in it, I know I’m in it.

I knew enough to be honest with my husband about it; no sense in trying to candy-coat it. He knows me too well anyway. I explained that I was confused by this sudden drop and that I’d be better off alone in my room where I hoped it would pass. He was probably hoping the same thing. Lord only knows what the poor man feels when I’m at the start of a downhill drop.

I also knew that in order to prevent this chemical spill (of the brain) from drowning me in its ooze, I had to practice my CBT (cognitive behavioral therapy).

What to Do When the Depression Roller Coaster Drops

All you can do when the major depression roller coaster plummets you to the ground is to take care of yourself and practice your cognitive behavioral therapy skills.

It was the evening already so I:

I started to feel better.

The day after that I went back to work, the depression having lifted somewhat – enough for me to at least test the ride to see if I was on my way back up. Thankfully, I was though who knows how long it will be before I hit the peak again, then sail screaming down the other side.

Regardless of how long I have battled depression, it still surprises me how it can just appear out of nowhere and knock me off my feet. It’s a few days later now and while I still don’t feel as good as I did before this roller coaster of depression began, I can at least function almost normally . . . and go on.

Get Involved and Help Others to Treat Depression
Mental Illness, Depression is Hereditary
Glo
May, 16 2020 at 9:54 pm

I know you posted this years ago but it jus helped me at least know I'm not the only one. My best friend and roommate points out regularly that ill be happy for a bit then crash into doom and gloom shorts after then back to happy back to crashing. It really is a roller coaster ride and not a fun one. And its frustrating to him, my other bestie, and to me, because it never ends. I cant jus be happy. Maybe i self sabotage when i realize im happy like ope not supposed to feel this good n i crash. Sometimes it feels like others think its intentional for attention. I crash n its pointed out that this always happens n it jus makes me feel worse like i dont like this i hate that this happens jus as much as you do and im the one experiencing it its not like i want this to happen.... i jus wish i could get off this stupid ride.

Hi, Glo. As a fellow depressive, I can totally relate to your issues. First off, please know that it's not your fault you feel the way you do. And you are certainly not asking for attention. Depression is horrible and I am sure you are doing the best you can to deal with it. Do you see a therapist and/or are you on medication for the same? Also, hang in there! You are definitely not alone.

Hello, Mat. Thank you for your comment. I'm Jennifer, the current author of the Coping With Depression Blog. I'm sorry that you are struggling. It's nothing to be embarrassed about. I'm glad you reached out here. I encourage you to be open with friends and family about what you're feeling. Speak with your doctor as well. There is help available. You are not alone.

Thanks for sharing. I’m embarrassed by how feel. I have always been very active but as of late I find myself drowning in sorrow.
This is not just a woman thing! Also another embarrassment for me. Anyway thanks

Just wanted to say thank you so much for sharing - it really helps to not feel so alone and to see step by step how you move through the day. I saw so many elements of my experience reflected in the details you shared. It sort of felt like a bit of a map of how to get through the day when it feels insurmountable. it also normalized and validated self care (which is important for me as i'm an over-achiever and can be hard on myself). I think there is power in that and it can shift my perspective and overtime it can shift my mood.

Hello, V. Thank you for your comment. I'm Jennifer, co-author of the Coping With Depression Blog. I, too, understand the struggle of the depression roller coaster. Having a guide for getting through the day is indeed helpful. I can also identify with being an over-achiever. I am learning to give myself grace, but it's still a work in progress. Making self-care a priority has certainly been an integral part of my recovery journey. I'd love to hear about some of the ways you practice self-care.

OMG!!! This is so what I go through. I know my family & friends try to understand but I know that secretly they are mad at me because they think I can control it, but I can't. Today I woke up feeling so positive & everything seemed so clear. But now after reading some of these comments I feel hopelessness creeping in because there is no easy way make this rollercoaster stop & I'm not sure I have the strength to help myself.

Thanks for sharing your experience. I feel the same and I always feel embarrassed to talk to anyone about it, I feel like people will judge me. But your video is good it made me feel sad but same time I felt so connected and it's like I am not alone

Thank you for posting. I too am experiencing that downward slippery slope. Everything seems so hard right now. I teared up watching your video...very sensitive. Took yesterday off from work to regroup and hoping and praying to climb out of this sooner than later. For those of us that go through this, it sure is a wicked ride. As many times as I've gone through this there is always the fear of not making it out. I guess this is where we help and encourage with one another.

Thanks so much for sharing your experience with depression! Most people don't get it and think that you can just snap out of it.

Why is it that we know and agree that at times we too do raped cycle. I hear almost all the time only Bi-Polar do that.
While we may not go so often between the ups and downs. For us our ups are really just up to the top of the valley.
And every chance I get to mention the walk that I have created. It is a very unique 5k fun walk that area 501-c-3 (we are one too) who offer mental health services/support to their clients can use - The Walk for Mental Health Awareness - Houston. We are a walk with a purpose. With a "Positive Public Dialog for all to become very engaged in. www.thehoustonwalk.org

Thank you for having the guts and the compassion for posting this. I watched it at 5:30 this morning. No, I hadn't just gotten up. I'd been up all night in that black fog. Your voice and your beautiful, "normal" face helped bring me out of the fog. You reminded me that, no, I'm not alone in this; no, it's not my fault; no, I'm not a freak;that, yes, it's damned hard to fight this sneak thief. I admire the hell out of you, Liana, and I'm cheering for you. :)

Hi Pookie. I'm SO glad that my posts, both written and video, resounded with you. It is my greatest wish that what I post here can help people know that they are, indeed, NOT alone and that there are ways we can help each other. Best of all wishes to you, Pookie (love your name!). :-)

Signs of sugar sensitivity: (From radiantrecovery.com) I continue to be depressed no matter what I do. Sugar-sensitive people may have a hard time getting mobilized. You may feel frequently sad or apathetic. You may be depressed and crawl through the day with very little energy. For women, the depression may get worse just before menstruation. Often, sugar-sensitive people are miserable in the winter because the decrease in daylight affects their already impaired brain chemicals. You may self-medicate your depression by eating sweet foods, since sweets are one of the few things that make you feel better, albeit temporarily. You may be taking an antidepressant like Prozac, but still have symptoms of depression. If that’s the case, you likely have a sugar-sensitivity aspect to your depression that neither you nor your doctor has recognized.

Wow! Thank you for writing this wonderful article! Nice, I guess, that someone agrees with me depression being a roller coaster ride. My down time is more than a day or two, unfortunately. But, I will try to use some of your suggestions. Best of luck to you.

Hi Lori. Thank you for your comments. This roller coaster ride was decidedly short, thankfully. I'm eternally grateful when I can come out of a down time relatively unscathed. I hope some of the suggestions help. Hugs.