Why Mental Health Misdiagnosis Can Be Traumatic 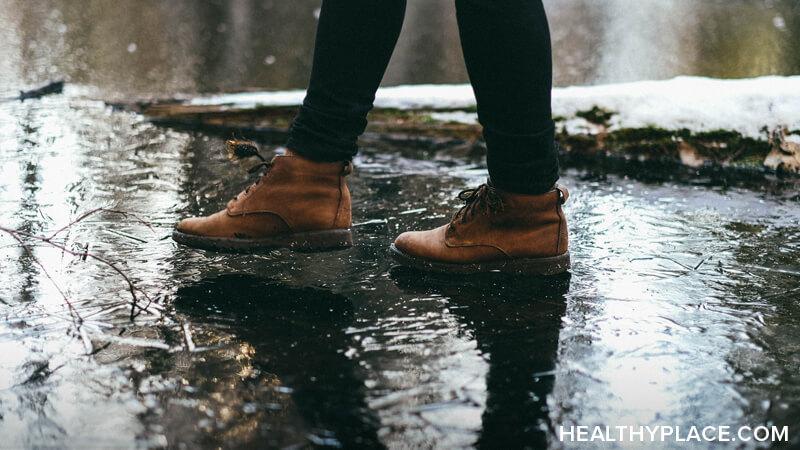 Let's face it: there are a lot of aspects of mental illness that can be traumatic, and mental health misdiagnosis can also be traumatic. What happens when we don't even have the mental illness we think we have? I was diagnosed with bipolar disorder six years ago, found out that diagnosis was incorrect two years ago, and now a huge part of my recovery is dealing with the fallout and trauma of that misdiagnosis.

I still don't feel comfortable or confident saying exactly what mental illnesses I have after I learned the hard way that diagnoses can be wrong. As a result, my understanding of my own brain is very fragile and uncertain, which makes it hard for me to trust myself when it comes to my own recovery.

The mental health misdiagnosis made me ask myself, "What if I don't know myself at all?"

This is the question I've been coming back to every since I found out bipolar disorder was a misdiagnosis. Because of childhood invalidation and enmeshment, I already have a lot of trouble seeing myself as the expert on me. Instead, I usually trust everyone else when they talk about me. When I suspected I had bipolar disorder, that was the first time I really trusted my gut. So I sought out a diagnosis, believing that I understood myself best, even when others suggested bipolar disorder type 2 might not be the right diagnosis for me, and then I was wrong.

What if that means I'm completely blind to who I really am as a person? For me, being misdiagnosed for such a long time has been traumatic because it invalidated an entire part of my identity, and I already had enough invalidation trauma in my past. Now, all my past invalidation and the invalidation of misdiagnosis are compounding, piling onto one another to make me feel deeply uncertain about my own identity.

One of my biggest fears that has resulted from my mental health misdiagnosis is that I might find the "right" diagnosis, but then be wrong again. This relates to my fears about not being able to trust myself, but it presents its own challenges too. I am a mental health advocate, I write about mental health all the time, but I don't always feel comfortable saying which mental illnesses I have, in case I've been misdiagnosed again.

Right now, I believe my diagnoses are major depressive disorder and generalized anxiety disorder, but I also relate to attention-deficit/hyperactivity disorder (ADHD) and various personality disorders. But I don't want to self-diagnose because what if I'm wrong again? What if I speak out as an advocate for one thing, and it turns out I don't have that thing at all? Does that make me a total fraud? I have so many fears about presenting myself to the world one way because I don't want to find out in five years that I was wrong, and I've just been fooling everyone. Including myself.

Letting Go of Diagnosis and Focusing on Symptoms

Nearly everyone I've ever talked to about my mental health misdiagnosis, from friends and family to doctors and therapists, have told me that the diagnosis is far less important than finding healthy ways to cope with the symptoms I'm experiencing. But the truth is, I have such conflicting feelings about that mindset. On one hand, it sounds really nice not to worry about my diagnosis anymore. On my worst days, it consumes every ounce of brainpower I have, and I would love to focus on other things again. Recently, I've actually been able to do that more and more often. I've been addressing my symptoms, like trouble starting tasks, dissociation, depression, codependency, and more, even if I don't necessarily understand where they're coming from or why.

Then again, there are days where I really want to speak out as an ADHD advocate because I want to write about my experience with time-blindness, executive dysfunction, rejection-sensitive dysphoria, and more, but I don't feel that I can, because I don't officially have a diagnosis. Or I want to talk about having depression, but I feel like I shouldn't, because my experience with depression is so abnormal in the sense that it is typically intense but short-lived and I often feel fine a few days later.

Overall, being misdiagnosed has been really hard on me, and even now, two years after finding out I was misdiagnosed, I am struggling to process everything and move on.

If you've ever experienced a mental health misdiagnosis, how has it affected you? Has it been traumatic, and if so, how have you processed everything and healed? Share your experience in the comments below.

How to Stop Feeling Numb
What If I Never Recover from Mental Illness? I Feel Hopeless
TUE
August, 20 2022 at 8:21 pm

We (plural system) were diagnosed with a sleep disorder instead of DID. We always knew it wasn't a sleep disorder, but because the diagnosis was made based on how our abusers reported our symptoms (such as being "comatose" - in reality dissociating, masking a non-verbal headmate, and the autistic urge to avoid eye contact) we were misdiagnosed. This misdiagnosis lead to us not getting help for our DID (of which we've been displaying symptoms for over half of our life) and receiving so called 'treatment' for our so-called 'sleep disorder' that was very traumatic.

Assault survivor is a traumatic experience
You should hire a lawyer and put that person in prison
That's what I would do
I was also labeled ocd odd bipolar depressed schizophrenic for enforcing a masters level understanding of international human rights humanitarian criminal refugee law as a 15 year old kid
I used to organize Darfur protests in NEw York with my best friend Sabina Carlson and she gave me this stupid assignment put omar al bashir in prison for that Of course if you want an end to genocide this requires going to the International Criminal Court My grandmother thinks iam doing this for the 115,000 euro tax free salary I don't need the money I just need Omar al bashir in prison Why did I learn the six un languages Arabic Chinese English French Russian and Spanish because the ICC demands it
My other dream in life is to start a NGO to enforce the African human rights system and whern I gave my high school teachers a crash course on the subject they arrested me Of course I won teh case (that requires learning Portuguese)
I also taught myself Afrikaans Xhosa and Zulu because I have this obessesion with South Africa and I have a connections there
I was diagnosed all sorts of disabilities
Also I got an invasive russian grandmother who does not think ic an do the basic functions of independent life
If I can sucessfully put omar al bashir in prison for the darfur genocide at the International Criminal Court I am not an idiot that actually is a very difficult assignment for a teenager to be given It took me 16 years to do it and I was able to do it

I was misdiagnosed as well.
Assault survivor
Was told by psychiatrist it happens a lot.